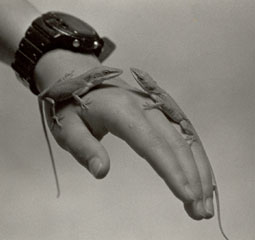 Probably the shortest pet fad to imprint upon my childhood was the pair of chameleons I owned around 1991 as a requirement for the Reptile Study merit badge. Because I owned them for just a few months and they lacked a cuddly nature, I don't even remember their names, although I'm guessing they were hilariously witty names like Cami and Leon that only an eleven-year-old could invent.

The picture on the left is the only proof that these lizards actually existed, though they look deceptively small because the digital watch I wore was gigantic and told the time in every time zone of the world while having five settable alarms and an EZ Bake oven for goldfish crackers.

The chameleons lived in a picturesque plastic terrarium underneath the skylight (because the sun is cheaper than a light bar) filled with sand and a stick to climb on. The fact that their home was boring didn't seem to bother them, since they didn't do much except sit on the stick.

"Hey here comes that frog, all right. Maybe he'll come near me so I can pet him, and stick him in a mayonnaise jar, with a stick and a leaf, to recreate what he's used to. And I?m pretty sure I?d have to punch some holes in the lid, because he?s damn sure used to air." - Mitch Hedberg

Chameleons eat mealworms and crickets, and apart from the novelty of storing bugs in the fridge, the only fun part of owning chameleons is to watch them catch their dinner. Granted, mealworms don't run away so much as they writhe in place, spelling words with their bodies (generally COUI or some variant), but the cricket-catching was much more enjoyable. Once, a cricket escaped, and lived under a set of shelves in the living room for about a week before finally coming out for recapture.

After just a few months, the chameleons died to a skin fungus that turned their backs black. One day, I came home from school to find the last remaining one being eaten by the cricket that had been put in as its dinner -- opening up the situation to plenty of lame jokes about chameleons in Soviet Russia.

The mortgage crisis is good news for bobcats

The bird who cried wolf