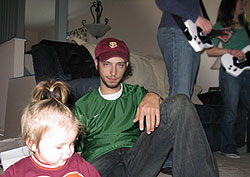 Yesterday was Shredding Day in the BU Household, although there was no Guitar Hero involved since I'm intrinsically horrible at that game. When I attempt to translate the 100% abstract shapes flying at my face into simple motor skills, I feel like I'm playing a live action version of Frogger while dosed up on a Quil Bomb (a half pint of Nyquil with a shot of Dayquil), slipping further and further behind until I finally force the song to end prematurely because mediocrity is no longer an acceptable level of video game skill. 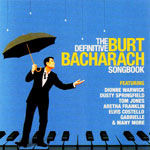 Shredding Day in my vernacular is the day I drag the three foot high paper shredder out of the closet and commence the complete obliteration of a single year's worth of receipts, bills, and pornographic notebook sketches. There's always plenty to shred on this day, because I save anything and everything for at least three years (my stage name is Buri Packarat). The time limit on saving used to be "indefinitely", until I sensibly realized that I would never again need that receipt for two hash browns from 1997 unless I were planning to bury my filing cabinet as a time capsule. And even in that case, why would anyone from the future care that there used to be a Dollar Menu? 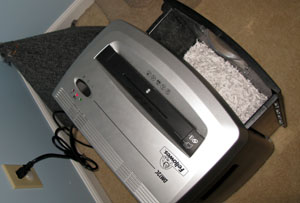 It's a very satisfying feeling to watch my shredder get down to business. The motor inside is so powerful that you could probably despine your latest issue of Cosmo and send all the pages into the JAWS OF DOOM all at the same time. A year's supply of mortgage stubs from 2004 that only exist to remind me that I have eight billion dollars left of principal to pay off disappears in a puff of confetti, which I can then use to start small porch fires to scare unruly neighbours, lower property values, and decrease my land tax. I imagine that in a pinch, the shredder could double as a hamburger maker, or a processor for half-frozen filets of tuna.

Even better, the shredder has a CD mode -- with the flip of a flap, you can convert a used CD full of blackmail documents into an avant garde work of art that will never be loaded into a CD tray ever again. Today, I had a full spindle of twenty CDs to destroy which the shredder consumed gleefully, without complaint or malfunction. The only danger of having this much horsepower in your study is the tiny voice in the back of your head, egging you on to destroy bigger and tougher materials. Science project backboards! Spatulas! Very small rocks!