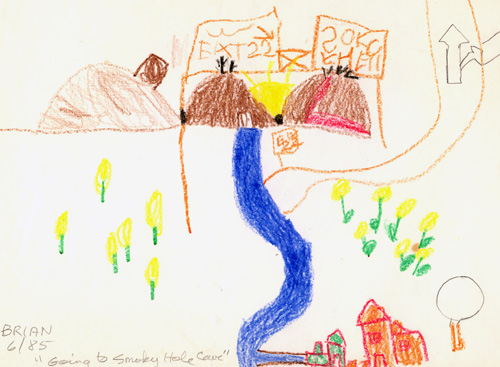 This first picture was drawn on a trip to Smoke Hole Canyon in West Virginia. From the nearest town of Petersburg, you apparently can only reach the canyon by canoe on the South Branch Potomac River, passing through a scenic field of daisies. After paddling a ways, you should take Exit 22 to reach the canyon, which is nestled between two prickly African boobies.

If you choose not to take Exit 22, you will have to get out of your canoe and walk up the road into the Land of Zero Depth Perception. Otherwise, look for the SOKO HELL sign, which obviously advertises that you can play the hardest levels of Sokoban in the canyon. 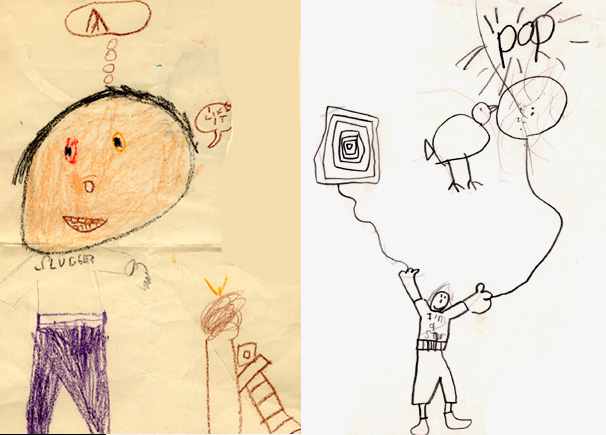 These two self portraits might give you an idea of what I looked like when I was five years old. In the first, I'm wearing my SLUGGER sweatshirt and thinking about how cool it would be to build a treehouse (I LIKE IT!). I was very vain, as demonstrated by my disproportionately swelled head, and apparently think that treehouses should be very tiny so that no one gets injured when falling out.

In the second picture, my ego is somewhat in check, although I'm still wearing a T-shirt that says "I'M A STAR!". Apparently, I've used the psychedelic balloon with the Batman-TV-Show-style hypnotic spinner to brain wash the giant seagull, who then proceeds to pop the dirty balloon covered in cat hair on the right. This gigantic flying bird seems to be some sort of chicken.