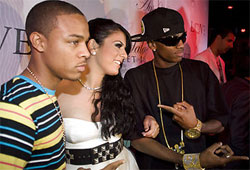 A new Range Rover. Christian Dior sandals. A shopping trip to L.A. But the birthday bash is what really takes the cake.

Like a penny-pinching pensioner clipping coupons, I'm always on the lookout for the next big story to mock on Newsday Tuesday. I clipped this out over the weekend from the Washington Post, planning to do my usual routine of multiple rereads mixed with highlighter overuse, scribbled one-liners, and quicky quirky sketches on Post-It notes.

Ayse Halac, as it turns out, is a high school sophomore from Leesburg, celebrating her 16th birthday Thursday night at the Northeast Washington club. And the crowd of "paparazzi" are in fact a posse of girls in short dresses with little digital cameras -- friends of the club owner's daughter, brought in to complete Ayse's chosen theme of "Hollywood Chic." Soulja Boy and Bow Wow are performing, and Ayse's mom threw in some extra money to fly in R & B singer Mario on a private jet to croon "Happy Birthday".

The problem with this article is that it might be impossible to make it any more of a mockery than it already is -- nothing I could possibly say about a $300,000 Sweet Sixteen Birthday Party would make it more ludicrous than reality. (Sadly, Ludicrous did NOT perform at the party, although Soulja Boy was pissed that he didn't get enough money to peform his one song).

Fifty television screens continuously loop even more photographs of Ayse (pronounced AYE-sha). Seventy-two LED panels, brought in just for the night, show a live feed of her entering the club. The 15-foot JumboTron outside the club displays Ayse's face, the first time a non-celebrity has graced that screen.

Also present at the party were the aforementioned gaggle of girls screaming Ayse's name, and Ayse's face plastered on five hundred cocktail napkins (Ayse's father vetoed her face on the toilet paper, preempting any jokes about Ayseholes).

Ayse's friends and acquaintances -- about 200 of them -- were picked up at Stone Bridge High School in limo-buses and chauffeured to the club . . . Of course, not all of the 200 guests are close with Ayse. Asked whether he is, Kaine Higgins shrugs. "Eh," he says. 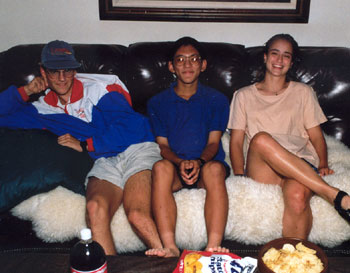 Higgins was quick to add, "I'll be sure to sit with her at lunch for the rest of the year. I want to be invited to the open bar wedding in a few years. I hear those Turkey people get married young."

Thinking back to my own Sixteenth Birthday, I was obviously in a lower income tax bracket than the Halacs, having invited only 10 of my closest friends to eat Pizza Hut pan pizza and potato chips, and drink Coke out of 2-Liter bottles. The activities of the evening included Super Tennis on the SNES, Doom 2, a Trezur Hunt, and backyard games where players tied balloons to their ankles and tried to stomp everyone else's balloons first.

What did you do on YOUR sixteenth birthday?

What will your kids get on their 16th birthday?