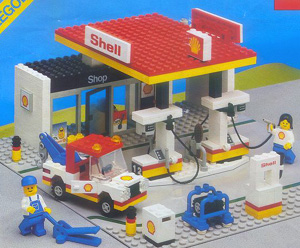 The very first Lego set that I ever owned was the 1986 edition of the Shell Service Station. Shell's efforts to imprint children while they were young seems to have failed, since I only go to Shell stations when there's a line of cars at the cheaper station around the corner. Despite that, this set was pretty neat for a Town set, with all sorts of extra gadgets and subplots, like the mechanic in coveralls whose lifelong dream was to go on the road as a ventriloquist with his blue alligator puppet.

Though I would eventually own enough Town Lego sets to construct a massive BUtropolis on the living room floor, the next set I owned was also the first Space set -- the Cosmic Fleet Voyager. This ridiculous monstrosity looks like it was designed by a committee of preschoolers, and would probably get parked in the back of the spaceship rental lot for that special flavor of annoying customer. Note the two plungers in the nose of the ship -- these were designed to extract ice from the surface of the planet whenever it crash lands. The frequency of crashes was high, since the body was so aerodynamically unstable that pieces fell off whenever you picked it up. 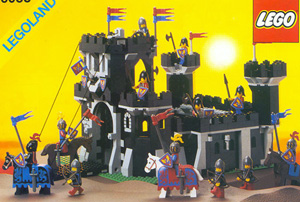 Jumping ahead a few years, the first Castle-themed set I owned was the Black Monarch's Castle. Until the Pirate sets came out in the 90's, the Castle set was easily the coolest of the sets, mostly because of the massive collection of plastic halbards and maces. This set also introduced horses, each with an unsettling chunk of horseflesh missing in the middle, so you could saddle them up and stick a Lego figure in the saddle. This was probably the precursor to the cow at Virginia Tech with a window in its stomach. 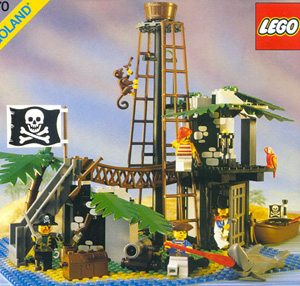 My first Pirate set was the Forbidden Island, bought in the waning days of the BEST Company in Shirlington, where the Legos were on the basement level, down the escalator and back on the right near the household paints. You can tell how cool it was just by looking at the picture on the box -- this set came with a pirate flag, booty, palm trees, a rope bridge, a trapdoor, a jail, a rowboat, a monkey with a gun, a parrot, a shark, and a cannon. Of course, the set wasn't very extensible, since you can't exactly connect the parrot to the shark to make an alternate set (a preview of the modern sets where one in fifty pieces are old-fashioned Lego bricks while the rest are some variant on unreusable hot dogs or Star Wars motifs). Despite these shortcomings, the Pirate sets were the best, and I eventually owned the Caribbean Clipper, the Black Sea Barracuda, and the Eldorado Fortress (which I will some day pull out from under my house and rebuild).

Think twice before swearing in storm