Every month in elementary school, we would receive a copy of the school newsletter to take home to our parents. Contrary to popular impression, these newsletters were not safety pinned to our jackets -- we maintained the complete responsibility for delivery, which is probably why most elementary school parents were clueless. Every newsletter began with a pithy unreferenced quotation, teaching children that plagiarism is appropriate in all settings, and the body of the letter was typed in a fake cursive font. This was obviously a conspiracy to disenfranchise the first and second graders who had not yet learned how to SWOOP DOWN with their pencils.

The opening section contained tips for parents to help their kids become better citizens, written in a neutral and politically correct manner. Obviously, it's the parents' fault that their kids are late for ELEMENTARY school, but the school administration is not allowed to write "Come on, parents, get your asses in the minivans. Also, you don't need to put make-up on if you're still in a bathrobe." because someone would be offended. This method is still used today in my HOA newsletter, which always includes two politely worded requests to remove Christmas lights and to park somewhere other than your front lawn.

After the endless list of school activities and PTA meetings came the section with awards and accolades. 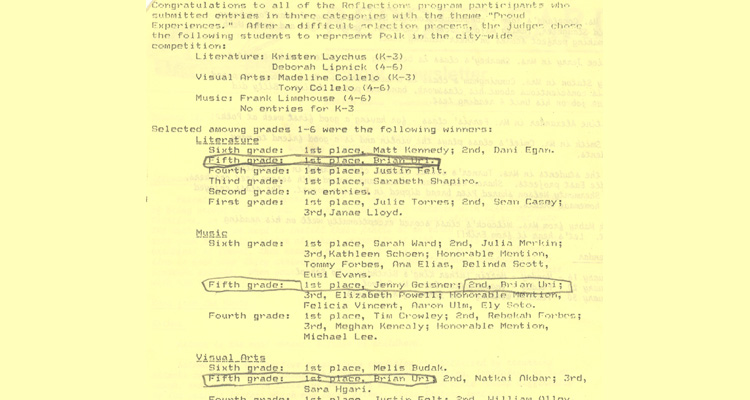 for the Reflections Contest about PROUD EXPERIENCES. Ruff yap yap! I don't remember what I submitted in the other categories, but it's obvious that I was trying to be the Little Man Tate of Renaissance Men.

If you were not lucky enough to have a parent that forced you to enter a bunch of contests, your name would likely appear in the final section, which might be called "The Shout-Outs" if written today.

I'm glad Katrice (in Mrs. Sharkey's fourth grade class) finally got good at cursive -- it only took two and a half years1. Also, Tai has a lot of friends.

1: Longtime readers will call me a hypocrite

but I contend that my poor cursive grades were caused by my messy lettering and not a lack of cursive comprehension.