♠ Last night's LOST was pretty good, and much better than the episode before it. Dave Matthews mercenary is still scary, and the lack of beach time was good. They should really give Desmond more to do than sit around looking Scottish though. There are no more episodes before the three-hour season finale (which will play out over the next couple of weeks).

♠ The energy of this season is another argument in favor of twelve-episode serialized dramas -- you get in, tell your story, and get out. A show with 22 forty-minute segments to fill is obviously going to have some stinkers in the mix (like Jack confirming yet again that he doesn't believe in miracles, or Sydney Bristow falling in love with a butt-ugly assassin).

♠ Speaking of twelve-episode serialized dramas, the fourth season of The 4400 was released on Tuesday and will be on my list of things to watch this month. Unfortunately, the show was cancelled at the end of the fourth season, but apparently the writers had a little time to edit the finale to be more conclusive (something which Veronica Mars, unfortunately, did NOT do). 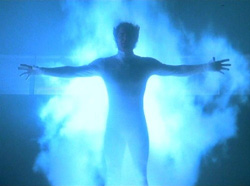 ♠ It seems like I'm reaching the tail end of good shows that aren't cancelled yet, thought Dexter and Prison Break will come out in the fall. I considered buying five seasons of QUANTUM LEAP, because it's probably the greatest 80s show ever made, but balked when I realized they were selling for $30-40 per season. One of these days, they'll release a boxed set that ends up on Amazon Marketplace for a couple euros (since by then Europe will have conquered the US) and I'll snap it up. Until then, I'll keep wasting my $12 a month on Warcraft.

♠ Speaking of Warcraft, remember the longtime URI! Zone reader, Asmodues, who I always annoyed by telling him that his handle should be spelled "Asmodeus"? I randomly bumped into him in a cross-server game of Warsong Gulch the other day. He was only level 50, but we won handily anyhow.

♠ Team Turtle has been winning so much that we finally made new characters on the enemy side (so we could split up and fight each other when the games got too one-sided). The problem with this approach is that everyone else got to Level 59 while I was in Europe. While I try to catch up, THEY steamroll ME in games, and I have no allies because they're all on the other side. Evil-Plinky is level 45 right now though, so it won't be much longer. I'm sure I'll be 47 by the end of today, because that's the kind of exciting life I lead (and because I have to go to bed early so I can't go out and party at CLUB DREAM DANCE HEAVEN LIQUID MAGIC like I would normally do on Fridays).

♠ Tomorrow, I'll be getting up at 3 AM and going down to Tech to attend graduation, since my sister is graduating from vet school. Congratulations! After that, she and her husband are signed up for another three years of residency in Blacksburg.

♠ I still love visiting Blacksburg, but I do wish it were a couple hours closer to Northern Virginia. Maybe Dan can put his EE skills to work and create an electromagnetic teleporter that will swap Staunton and Roanoke Valley so I could get there in two hours rather than four. 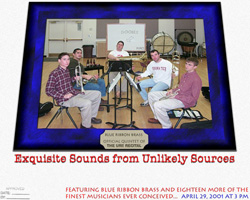 ♠ Speaking of Tech stuff, Kelley Corbett, Jonathan Shachter, Scott Elliott, Skippy, and some interchangable horn player (redundant?) will be giving a free-admission concert at Harris Pavilion in Manassas on Wednesday, May 14th (next week)

. Donations will go to charity. The first three performed in my Fifth-Year Recital in 2001 as Blue Ribbon Brass (Blue Ribbon is a beer). No doubt, Skippy is performing because Doobie is now married and not allowed to fraternize with bad influences anymore.

♠ The concert should be good because these clowns have been evading adulthood in various music schools across the country since leaving Tech, to the point where most of the degrees listed on their CVs are not made up. Come listen if you're in the Manassas area, because honestly, what else is there to do in the Manassas area?

♠ Happy Birthday to Emily Spellerberg, Allen Lutz, and Christy Kull! Have a great weekend everyone!