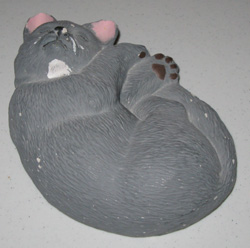 The first pet which my family owned was a small grey cat with a white spot on its neck named Cindy. There are no remaining up-close photos of this cat although its likeness has been immortalized in one of those premade sculptures you can purchase and paint to give other people the impression that you're artistic.

We owned Cindy when I was in first grade, at the same time when we owned two expensive leather couches (because foreshadowing is most effective when experienced directly). I honestly don't remember much about this cat except that it got trapped in our home office all day long while we were at school and peed in a big orange chair (which is still orange, and still smells like pee to this day). After this day, it learned that chairs were where you pee. 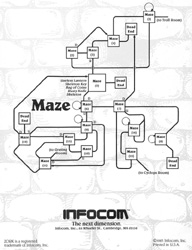 I used to take hintbook maps from Zork and other Infocom games to school so I could take them out at lunchtime. Using my encyclopedic memory of all the text from the games, I would let my friends play the games by proxy. (This is also called Dungeon Mastering or DMing in the Dungeons and Dragons crowd, but D&D is for nerds and geeks and I do not belong in those categories. By the way, I leveled my Blood Elf Priest to 59 last Friday with 4 days /played and gained the 2805 honor required to get a PvP Fear Trinket. FTW).

About midway through the school year, we noticed that the maps were starting to smell a little sickly-sweet, like the styrofoam fresheners they keep in urinals. Because the scent wasn't that strong, we continued playing our little games until the night when I was sitting in the family room and saw Cindy taking a huge leak all over my elementary school backpack. Needless to say, this definitely rained on our lunchtime gaming parade. 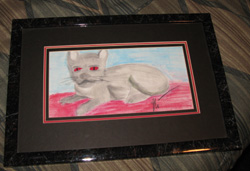 Pets in our family generally stayed with us until one of three things happened: they died, we got bored with them and our dad gave them away, or our dad got sick of them and gave them away. In this case, it was option #3 -- Cindy punctured two leather couches and gave us a nice rumcake (except replace the rum with urine and replace the cake with every chair in the house). After less than a year, Cindy was donated to someone living in an apartment on the other side of town, and given a name change since her new owner had a boss named Cindy.

Police perplexed by photos of privates

IPod may be responsible for helicopter death