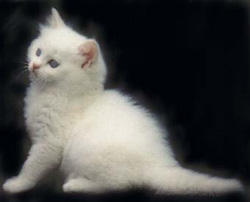 Yesterday after work, Rebecca and I went to see Becca, fresh from her first year of college with a new kitten that's only about seven weeks old. Its mother was a barncat whore, so it's unclear what the breed is, but it looks a lot like this ragdoll breed on the left (except, more in focus and less like someone tried to attack it with a pink eraser). If you have ever played a computer game with "ragdoll physics", those complex physics were modelled by putting a cat like this in a jumpsuit and launching it out of a cannon.

Becca's cat, Leonidas, is still very tiny -- probably the size of two clenched fists put together or a single poop from a Saint Bernard. It runs around the room chasing toys, licks stuff, and solves complex integrals from 0 to infinity in mere seconds. We considered setting up a play date with my cats, but it probably wouldn't be very fun since Booty would eat it and be like the python in this X-ray 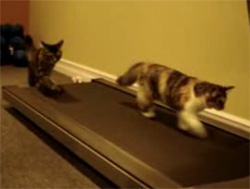 To round out this post, here is a video of two cats on a treadmill

. This could ostensibly be the solution to our clean energy concerns all over the world.

Don't forget about the brass quintet concert tonight at Harris Pavilion in Manassas (7:00 PM - 8:30 PM). The first five hundred people to arrive will receive free T-shirts with Skippy on them. Also, Paige has returned to the Bloglog on the left!

Buckle up your beer