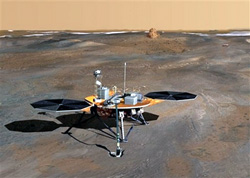 Like a miner prospecting for gold, NASA hopes its latest robot to Mars hits pay dirt when it lands Sunday near the red planet's north pole to conduct a 90-day digging mission. The three-legged Phoenix Mars lander . . . is zeroing in on the unexplored arctic region where a reservoir of ice is believed to lie beneath the Martian surface.

To be clear, the article is not saying Phoenix is a gold digger, but it's not messing around in a region where it won't find anything. This type of colourful simile is common in stories that NASA wants to excite the public mind.

Phoenix lacks the tools to detect signs of alien life -- either now or in the past.

When asked, project manager, Barry Goldstein, confided that a fully-functional flux capacitor (and the accompanying plutonium fuel) was too heavy and too expensive. He said the extra savings were spent making the robot look extra fly for the day it would touch the Martian sky. Good photography is the keystone to any popular space mission. 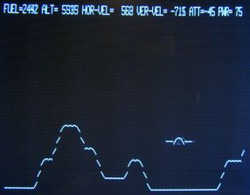 On Sunday, Phoenix will punch through the Martian atmosphere at more than 12,000 mph. Over the next seven minutes, it will use the atmosphere's friction and a parachute to slow to 5 mph. Seconds before touchdown, Phoenix will fire its thrusters for what scientists hope will be a soft landing. The last time NASA tried a soft landing on Mars, it ended in disaster.

NASA blamed previous crashes on an engineer who had trained extensively with the 1980s game "Lunar Lander", written in BASIC. Apparently an extra GOTO statement in the game's code made this engineer believe that it was safe to land at 456 miles per hour. Perhaps it is only fitting that the new robot is named after a mythological bird that ends its life in a fiery explosion.

The spacecraft's main tool is an 8-foot aluminum-and-titanium robotic arm capable of digging trenches 2 feet deep. Once ice is exposed -- believed to be anywhere from a few inches to a foot deep -- the lander will use a powered drill bit at the end of the arm to break it up.

When asked what would happen if there were no payload in the first 2 feet of ground, Mr. Goldstein exhaled deeply, scratched the back of his head and admitted, "We'll probably be shit out of luck." His rare candor is unsurprising, considering that the Phoenix robot does not come with wheels, and cannot reposition itself after the initial landing.

"It'll be a construction zone," said mission co-leader Ray Arvidson of Washington University in St. Louis. He predicts the ice will be "as hard as a sidewalk."

Because this is highly technical jargon, please refer to the following graph for a comparison of the hardness of Martian ice against various everyday objects.

The excavated soil and ice bits will then be brought aboard Phoenix's science lab. It will be baked in miniature ovens and the vapors analyzed for organic compounds.

A quick glance at eBay reveals that EZ Bake Ovens can be purchased for as little as $10 these days (less for the government-recalled model that partially amputates fingers), so at first, it's puzzling why the Phoenix robot costs so much money. NASA has spent $420 million on this mission, not including the $100 million wasted on a cancelled prototype from NASA's "faster, better, cheaper" era, when designers in the good life felt that the best things in life were free.

It is hoped that the "harder, better, stronger, faster" era will result in fewer crashes, even if the resulting robot costs enough to feed the obese of America for at least seven weeks. The price tag certainly isn't buying longetivity:

While scientists say there's a chance Phoenix could live a month or so beyond its 90-day mission to see late summer or fall, it won't survive as long as the rovers. That's because its solar panels won't produce enough power to keep it alive during the Martian winter.

Said [mission co-leader] Arvidson: "Its feet will be embedded with dry ice and the sun will be below the horizon."

Mr. Arvidson is currently engaged in a plagiarism lawsuit for his alleged theft of a Japanese Yakuza hitman's trademarked slogan.