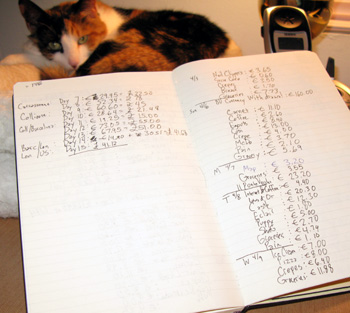 When we first planned this trip out back in January, we'd decided that $3000 per person was the maximum amount we wanted to spend. In the end, despite all the heart palpitations over the expensive pounds, we actually spent just under $2500 per person. We alternated lavish meals with local foods from the market and hit the freebie museums (especially in London), but never sacrificed the things we WANTED to see because they were expensive. Of the $2500, about $1200 went towards major transportation (planes and trains), $600 went towards lodging, and the remaining $700 was our slush fund for the Metro, food, drinks, and daily attractions. If you plan ahead, going to Europe is suprisingly feasible -- particularly if you travel with another person, and especially if you're under the age of 26 (those little snots get discounts on EVERYTHING).

We did not use any of the all-inclusive tourist passes, partly because we didn't want to visit many of the included places, and partly because going off-season meant there were no lines to begin with!

The warm travel season for Europe officially starts in May. Even towards the end of the trip, we could feel the increase in tourists acutely. To me, going right at the end of the off-season was a worthwhile trade-off -- we got to experience the cities and most attractions without any crowds or lines. The downsides: sometimes our toes froze, and some places had greatly reduced hours or were closed for renovation. If you don't mind a "cold, but getting warmer" Marco Polo approach to tourism, April is a great month to go. Any earlier would be way too cold to be worth it.

I preferred the little cities over the big cities in general. Carcassonne was wonderful, but I could see it getting boring after more than a couple days. Collioure was a perfect idyllic setting, and someplace I might want to retire to someday. Out of the big cities, London was my favourite for its charm. If I spoke all three languages fluently and could move to any of these cities today, my pick would be London -- I could see myself living a daily life there without to much effort.

To Be Concluded tomorrow...

GTA 4 did not release with stunt stabbings

Free Tibet, but not on Mount Everest