The Silver Line, which provides Northern Virginia with its own brand of Ross-and-Rachel drama, is back on the table again after yet another reversal of federal funding

. The goal of this project is to connect the region's only major International airport1 with its inadequate Metro system so travelers don't have to use the inappropriately-named Washington Flyer taxi monopoly, which never travels at more than 45 miles per hour when the meter is running. 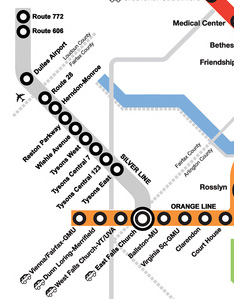 With all of their resources devoted to getting this built, the Metropolitan Washington Airports Authority has spent surprisingly little time figuring out how to make it profitable in the coming years. Instead of targeting penny-pinching foreign tourists who will use the Silver Line twice and then never again, their core market should be Northern Virginian yuppies with disposable income (namely, me). I have a few suggestions on how to proceed.

First, they need to come up with a new name. When I think of Silver, I think of Diners, of trumpets that tarnish almost immediately, and of coming in Second Place to that clown who really didn't deserve First and probably cheated. None of these images make me want to hop on the train.

In fact, it might be better if they did away with colours entirely. Once you run out of your basic Crayola six pack, you open the door to poor choices like the Cyan Line or the Flesh Line (and the latter might be disappointing if no boobies are involved). Eventually you get sued by a colourblind rider who THOUGHT he was on the Burnt Sienna Line, but was actually on the Raw Umber Line and ended up somewhere in Anacostia with a stab wound and no shoes.

We can avoid this confusion up front by naming our new train as the "BU Line". This is a memorable, friendly name that could only be confused with the Blue Line, but that line is pretty useless anyhow (see also, Arlington Cemetery), and can be phased out. I wouldn't mind if the BU Line was coloured blue on maps, but yellow also works, since I, too, am yellow.

The other change I would humbly suggest involves the locations of the stations. Having a train go directly to the airport would encourage Northern Virginia's rich white minority to travel by plane, and it's a well-documented fact that "white flight" lowers property values and leads to violent crime. Instead of providing a conduit out, we should build the Metro so that it encourages people to spend money in the area. After much research, I have decided that the BU Line will have eight total stations.

East Falls Church: This is the one station from the Silver Line that I would keep, mainly because I travel here often to pick up women in Falls Church.

Tyson's Corner: The original Silver Line called for four stations in Tyson's Corner. This is ridiculous, because the people who shop here are also people who would never be caught dead on a subway train. The BU Line will only have one stop, and patrons will exit onto the median of Route 7 without any crosswalks. As more shoppers get hit by cars, the urge to shop here will decrease and eventually trains can just skip this station entirely (see also, Arlington Cemetery).

Wolf Trap: If Wolf Trap had a Metro line, it would easily be the best ampitheatre in the area and we could finally blow up the Nissan Pavilion and use that land for dumping hazardous materials. (It should not take four hours to clear out a parking lot after an Aerosmith concert).

Herndon: A station at Elden Street, with easy access to Popeyes, Panera, the Hard Times Cafe, and Popeyes. It might even be more efficient to relocate the Popeyes in the station, so you don't have to exit through a turnstile first. Alternately, Popeyes patrons would be eligible for a free transfer stub.

Overlook: A station at the intersection of Crestview and Herndon Parkway in Herndon would offer an easy access point to the W&OD trail. This would provide me with the illusion that I might someday go biking and get some exercise.

Church Mills: Having a station within a half mile of my house would allow me to walk there, conserving gasoline and reducing air pollution.

Potomac Run: The terminus of this line would be underneath the Sterling Costco, with underground tunnels to Petsmart, Target, and Friendly's. Escalators would be slightly wider to encourage bulk shopping.

As you can see, the BU Line would be a comprehensive solution to my our commuting issues. Please write to your local representative today and show your support.

1 BWI does not count as a real airport because it has three strikes against it: 1) it's in Maryland, 2) no one uses it, and 3) putting Washington in the name fools people into believing that it's near the city even though this is entirely false. Sure, I could rename myself "Brian Rattlesnake Uri!" but that would not automatically give me venomous fangs and maracas on my ass.