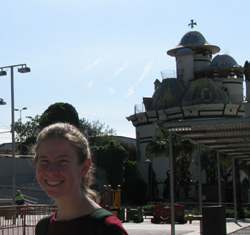 Most of Monday was reserved for travel. Since we had a 4:35 flight back to London, we woke up late and went straight to the airport, loitering as much as possible but preferring to get there and wait, rather than get held up somewhere out of our control. Our budget-balancing was so immaculate (a.k.a. lucky) that we had just enough euros remaining for a small but filling meal at an airport eatery. We even had enough cents leftover to buy ketchup packets (20 cents each), but did NOT, solely on principle.

In the airport terminal, we met an American who had been stationed in Iraq for years, and was on his way back after a Spain vacation with his wife (who had already gone back to the States). We then boarded our own plane, which had a thirty minute delay, during which they piped really horrible jazz through the cabin on an 8 minute loop. Picture 105.9 Smooth Jazz mixed with foreign pop stars phonetically singing English and then add some Chick Corea and you've got a good approximation. 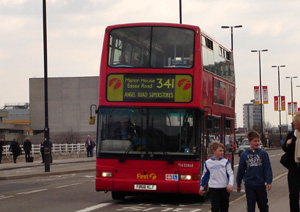 The flight itself was quick, and we breezed through Customs in mere minutes. Upon returning to London, we felt an immense sense of relief and familiarity. When we had first visited two weeks earlier, we were very aware that we were Americans, and felt like everything was foreign. It was intimidating to do anything at all for the first time. Now, we were just glad that everyone spoke our language and we didn't have to constantly work to figure out how to navigate or survive. Returning to London for a day before going home was definitely a good way to ease back into the rhythms of the US. 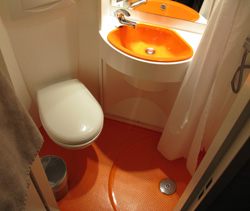 To the warm, cheery sounds of "Mind the gap between the train and the platform", we made our way to Earl's Court, a zone of London chock full of restaurants and eateries just outside Central London. We checked into the EasyHotel, an online hotel chain that gives you ridiculously cheap rates for a room that just barely has enough room for a bed. The bathroom is a futuristic pod with a shower and a toilet sharing the same space (so you can poop and wash at the same time, apparently). For an extended stay, it would get old really fast, but for a single night between our flights, it was novel and perfect.

We had pints and dinner in the Earl's Court Pub down the street, where we struck up a conversation with a jolly Brit while waiting for a table to clear. To celebrate the final night of vacation, I had a delicious fish and chips meal and three pints of some delicious porter whose name I cannot recall. The pub was friendly, with a reasonably old clientele, but a sign in the bathroom said "ABSOLUTELY NO DRUGS. WE ARE WATCHING YOU", and a town bylaw was posted at the door preventing people from taking their pints outside.

We also noticed that the condom machines in London are ridiculous -- a bloke could buy a single condom from the dispenser for 5 pounds ($10), which is either an ingenious way to make oen-night stands meaningful, or a way to promote unprotected sex. On the conspiracy side of the aisle, there was a condom machine in the womens' bathroom too, offering condoms for half the price. 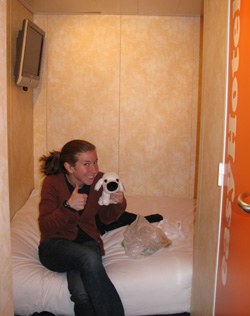 The EasyHotel was quirky, but it was also freezing cold because there were no climate controls in the room. We survived the night, but winter stays would probably be much worse.

For breakfast, we went to Benjy's diner, and savoured the hearty English breakfasts. I ordered the Builder, a massive platter including four pieces of toast, two sausages, baked beans, two over easy eggs, a gross cooked tomato, and a heaping handful of French fries for less than the price of a condom. I couldn't even finish the whole meal. Afterwards, we wandered around South Kensington looking for free paper vendors so we could have some reading material during our wait for a plane. We eventually picked up copies of our old friend, Metro, in the Tube station.

Back at Heathrow, we had a nice sum of pounds remaining, and reasoned that it would be more effective to spend them than exchange them. I purchased a paperback copy of John Grisham's The Appeal which hasn't been released in the States yet and finished it on the plane ride back (typical Grisham, slightly better than usual, better than his crappy non-lawyer fiction and not as good as his early work). We also stocked up on sandwiches and finger foods so we wouldn't have to rely on horrible airline food for dinner. When we finally boarded the plane a couple hours later, we were as prepared as we'd every be. We got nice seats in the front of the Economy section, giggled whenever they said "DUTY FREE", and listened to XM Radio all the way home.

Arriving home at Dulles, we were greeting by the ridiculous Customs area. Giant banners give welcome, and widescreeen TVs constantly broadcast images of everyday American life, such as a bear catching a fish in its mouth, cowboys riding across the mesa, and Indians doing tribal dances. In addition, strangely peppy and uplifting symphonic music loops loudly in the background. Had I not written a high school marching band show to this music in 1999, I would not have recognized it as the theme song from the Walt Disney World Millenium Celebration

(829KB MP3). Walt Disney is apparently one other foundation of American society. Incidentally, this song, with it's shifting meters, was a bitch to write a show for. The band stood still a lot. They also made Mickey Mouse's face at one point, but if I can be honest about their skills, it probably looked like a hippie fetus. 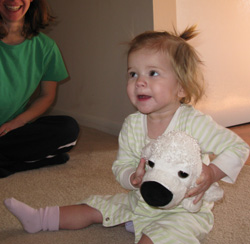 A half hour later, Anna picked us up at the airport and we returned to the comfort of Chateauri!. And the next morning, Pierre the French Poodle was adopted by a happy new owner!

So now that we are back in the US at this point in the narrative, what could be left to talk about? Well, no BU-approved trip would be complete without a Wrap-Up day (tomorrow) or a List Day (Friday). Do you have any questions you would like answered? Post them in the comments section!

You may now kick the bride

Colossal squid comes out of ice