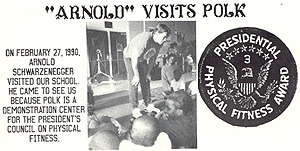 With the exception of the time Arnold Schwarzenegger visited for a photo opportunity (during which all seven black kids got to sit in front so our school would look ethnic), our elementary school gym program was neither exciting or innovative. We had gym three times a week, and spent ten minutes running around a circle, jumping over cones to the sounds of really bad 80s records. Sometimes, if we had exhausted all other possibilities, we had off-the-wall diversions like Parachute Day

or How to Square Dance.

One such diversion, with little to no aerobic benefits, was Jump Rope Week. During this week, Ms. Joyner and Ms. Balthasar (the two single, yet strangely close joint gym teachers) would put on Whitney Houston's I Wanna Dance With Somebody and the entire class would begin jump roping. The goal was to continuously jump for ten straight minutes without stopping or getting tangled on your rope. Obviously, you would tire out quickly if you put any effort into your jumping, so most people tried to jump as slowly and steadily as possible. The winners for the day would get a gold star, and the winner overall after several contests received... a free jump rope! 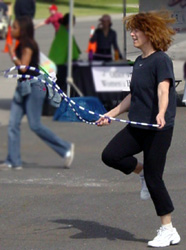 The problem with this contest was that it was staged to be won by the rich kids, who could afford to buy the lightweight neon jump ropes from the school for $5 a pop. My sister and I could, of course, but my dad the economist always insisted that "$5 for a jump rope was a rip-off". As such, we were left with the box of shared, lost, and/or unwanted ropes. These jump rope orphans came in only two varieties: twined plastic tubes that looked like a charm necklace gone horribly wrong and clattered against your legs with the force of a drive-by shooting, or the honest-to-goodness one made out of rope, with giant wooden hotdog handles. The latter kind were always the ones to get picked up by the resident sweaty kid, who usually lost his grip at some point during the session, hitting a crying girl in the back of the head or legs.

Besides the obvious advantage that a lighter jump rope affords, the rich kids were less likely to get tripped up on their ropes, and didn't have to worry about amputating their legs to prevent infection every time the plastic tubes pinched shins. After several contests in which the same three rich kids always won, the disgruntled working class unionized and kept a sharp eye out for any cheating or even a semblance of cheating. And, like any good public school, there was plenty of cheating to be found.

Kids would jump so slowly that their ropes would actually lose momentum in midair and start to fall straight down. Kids would alternate between jumping with both feet to jumping off one foot and then the other (this is as bad a travelling in basketball or putting your foot in the windmill blades in mini golf). Kids would stumble on the ropes and then keep going, hoping that nobody noticed.

In my five years of elementary school, I never once won a jump rope contest, even though I had plenty of jump roping prowess. I could jump rope backwards, with my arms crossed, double-jump (or as Alex might say, "with multiple jumps"), on one foot, and I could even do the retarded move where you spun your rope to the left and right as if you were machete-ing your way through a dense jungle. My problem wasn't lack of skill, just lack of interest. Around the six minute mark, I would always get incredibly bored and stop paying attention, ultimately resulting in a tragic plastic tube mishap. This character flaw persisted well into college, where I consistently fell asleep in classes at the forty-five minute mark.

Even the fifty minute classes.

She said she had e-mailed TVX and was told that her photo was to blame for the DVD's poor sales.

Help yourself to a mayo margarita