a clinically proven method of testing your mental acuity

♠ Ever since it flagged www.dooce.com as Pornography, I knew that the "learning" Web Filter at my job was a bit overzealous. My presumptions were confirmed yesterday when I tried to visit a Department of Defense site and found it blocked for my protection. I guess the filter is worried that I may be doing a Google search on semi-automatic weapons and bombs for a Postal-style operation. Luckily, I ordered the potassium nitrate from home.

♠ It's been another hot and dry week, which means I've spent lots of time indoors (a highly unusual occupation since I generally spend three out of five weekdays backpacking the Appalachian trail barefoot). You probably can't tell because I'm Asian, but I'm starting to a develop a tan. Thankfully, I have built in UVA protection, having gone to Tech.

♠ Last week, Emily bought me a new VT sticker to put in my back window which I can actually affix without Scotch tape. The stickers from FSU and T.C. Williams have long since curled into worthless husks of stickiness, much like cicadas run over by a bicycle. 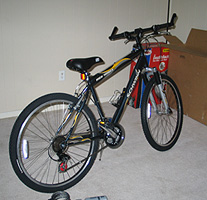 ♠ I have not yet ridden my biycle -- the first half the week was devoted to revamping the web site in such a manner that Beavis believed it to be broken, so another thing I'll do this weekend is to calibrate the brakes and do doughnuts around Booty. 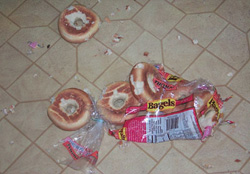 ♠ You may believe that doughnuts around Booty are cruel, but she can easily hold her own around baked goods with holes in them -- a fact I learned firsthand in Tallahassee when I left her alone in the kitchen at night.

♠ Mike, of Chompy and Mike, will be coming up next week to help Jamie move to D.C., and will get to see how big my Booty has gotten since he last saw her four years ago. Chompy will not be making the trip, but Booty hates Chompy anyhow. 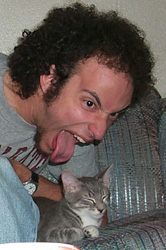 ♠ I'm not sure how much more mileage I can get out of this picture, but I'm sure it's good for at least ten more uses. Maybe Mike can wager "not using this picture anymore" when we beat him at poker next weekend. 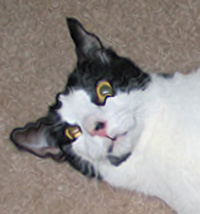 ♠ This weekend, I have a barbeque / poker extravaganza to go to in Centreville on Saturday, followed by a stop at the Suzanne-Biddick-Smiths to pick up the gay kitty brothers for another weeklong stay at Chateauri (title courtesy of Mike). They spend so much time at my house that I won't be surprised when they become latchkey kids and start doing drugs. It's all good though because I got a gift certificate for opening up my home to the kitties, which I promptly spent on the TV show, Freaks and Geeks, and two cheap-o CDs by The Darkness. On Sunday, I planning on filling out all my passport forms so I can go visit Paige in Spain next spring/summer, because the wait time for a passport is roughly fifteen years right now.

♠ In 2005, Paige went through my site and compiled a list of her favourite witty sayings. You may have noticed the ubiquitous revolving quote in the upper right below Big Blue (a feature suggested by Anna). If you have suggestions for quotes from this site or related somehow to this site, please let me know and I'll add them to the page!

They ranged from "It's fun" to "I wanted to give someone else a sexually transmitted disease".