There are no spoilers in these reviews 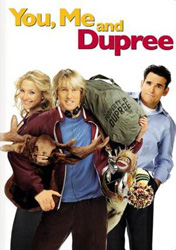 You, Me, and Dupree
This movie had a few funny moments, but it couldn't decide whether it wanted to be a buddy comedy or a relationship drama. It also couldn't decide whether the story was about the betterment of the title character, Dupree, who's a single layabout, or the issues of the newly married couple he shacks up with. Matt Dillon is slightly less annoying than normal here, and Michael Douglas has a fun supporting role as the overbearing father-in-law. Good for a rainy day, or when there aren't any other movies on the shelf. 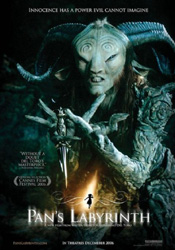 Pan's Labyrinth
A story about a little girl who discovers a mythological world, set against the backdrop of World War I in Spain. Other than a few brief scenes of highly realistic violence, it worked very well, as long as you're willing to read subtitles (the entire movie is in Spanish). Although the English title is Pan's Labyrinth, the story is not directly tied to Greek mythology, and the faun in the story is not actually Pan. 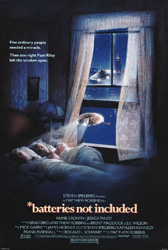 batteries not included
Rebecca and I found this in a thrift store for fifty cents, after just having discussed it as memorable childhood movie. It's a fun light-hearted movie of the 80s from the era when Steven Spielburg was king. The story tells of alien robots who come to Earth and are capable of fixing things, and it's neat to see the throwback special effects and Spielburg's classic style of giving his robots humanistic characteristics. The personification of the street thug as a guy wearing a wife beater and a Miami shirt is worth a chuckle too. 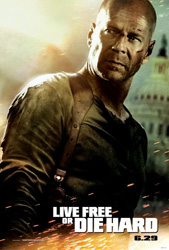 Live Free or Die Hard
This was the first movie I'd seen in the theatre since last February's Music and Lyrics trip. This is the fourth movie in the Die Hard series, so if you go into it expect a Die Hard style movie, you will love it. The fact that the plot has John McClane racing across much of the East Coast lessens some of the suspense, but the stunts, explosions, and action are all top-notch. The only part of the movie I didn't like was the ridiculous scene towards the end which involved a big rig truck and a fighter jet. You have to suspend a lot of disbelief to enjoy an action movie, but that particular scene was just so over the top that it was laughable.

Being my size, I have to eat a lot, and this [money] will go towards paying the grocery bill.

The machines are winning