Welcome to the Twelfth Edition of the URI! Zone, guaranteed to be a smashing literary success, because everything is better with an elf in it. Of course, this maxim doesn't apply to the The Lord of the Rings movie trilogy, which could have sported a more-tightly plotted pace by cutting out fourteen elves, thirteen shots of Frodo looking constipated, and at least one scruffy, white actor that looked like all the other scruffy, white actors. Middle Earth should have had more racial variety in its human inhabitants, maybe employing some FOB1 Asians for the battle scenes. But, I digress. 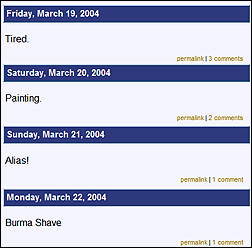 Today's post marks the 1,500th time I've ever written a news post for this site. Granted, some updates were much less involved than others (see exhibit A on the right), but in an age where the average life span of a web site is only 44 to 75 days2, surviving for eleven full years is surely worthy of a pat on the back (or a pat on the ass if you are now, or will someday be, a player on an American football team or a shamefully defrocked member of the clergy).

Here are some of the new features you will find in the Twelfth Edition:

I don't have any major plans for the 2007-2008 timeline other than to keep on truckin' with daily doses of music, reviews, absurdity, and interestyng news story links, but if you have anything you'd like to hear me talk about, feel free to let me know! For today, I will leave you with the following interestyng statistics about the URI! Zone and my news updates.

Ohio plays a round of "Blame The Intern"

Five of the largest, oddest and most useless state projects

3: Composer of the artful song, Boobies,