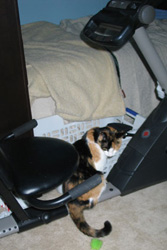 After a hiatus of approximately nine years, I started biking again, taking evening jaunts around my sidewalkless neighbourhood after the temperature and the traffic have cooled off. With each trip, I'm rediscovering why biking is so much better than the other exercises I might deign to stoop to (and muscles I'd forgotten existed).

Biking is better than running, because when you run somewhere, you generally have to run back (unless you have inadvertently circumnavigated the globe). Stopping while running doesn't get you any closer to your goal, but you can coast occasionally on a bike. Stationary biking is nice because after you've biked a mile, you get up and you're still in your living room, eliminating the need for a return trip. However, the scenery is more boring than a Robert Altman movie unless you watch TV or read a book, and I tend to slow or stop cycling as I get more distracted by a show. 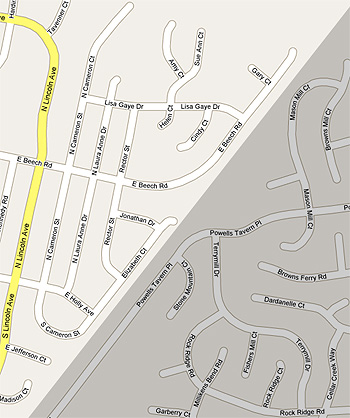 The past two nights, I started exploring the little clusters of subdivisions around my house, ones which (until now) I've only driven past on the way home from Popeyes. The naming conventions for roads are quite complex: east-west roads are named after bushes and trees, unless they also curve north-south, in which case they're named after Presidents. North-south streets are all Presidents, except for courts, which are assigned silly gender-neutral names as if someone on the naming board was one of those yuppy parents that named their kid, Throck or Teegan.

The only exceptions to these rules are in the northeastern corner of the neighbourhood, where there was obviously a dearth of acceptable trees, Presidents, and random mixes of consonants and vowels. Here, the streets are just given girls' names -- probably all the girls the head of the Street Board slept with in college. I hear Sue Ann and Lisa Gaye were pretty hot (but I'm not sure I want to know the story behind Gary and Jonathan).

Despite having sections with less than 50 yards of open fields between my neighbourhood and the town of Herndon, there are no through streets in the area I bike -- a measure surely intended to keep out all the illegal immigrants who couldn't possibly cross this vast expanse of undeveloped meadow to the promised land. Over there, where the property taxes are roughly four times my annual income, the streets are given names like "Powells Tavern" and "Josephines Bordello" so they evoke the quaint eighteenth century spirit of Olde Herndone.

It was much easier living in Alexandria, where every street was named after a failed Confederate soldier and every stop sign looked like a Confederate flag (but without the blue stripes and white stars).

FBI stops weeding out the applicants