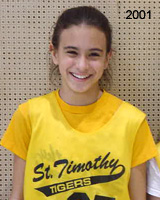 Next week, little Becca, the second-youngest regular visitor to the URI! Zone, will leave the area for her first semester at Virginia Tech, continuing the longstanding family tradition of doing everything the four older sisters do (with one inexplicable "who the heck goes to James Madison University? whatevs." anomaly in the early nineties, that will probably be rewritten in the Official Family Biography pamphlet when their homestead becomes a Historic Preservation Site). Because embarassing photos are fun, here is a picture of her in the sixth grade (the same year I started writing daily updates) as a member of the St. Timothy Tigers, a basketball team that puma'led a lion's share of their opponents.

Becca recently got her rooming assignments to the "indifferent, but thank God it's not a Pritchard" Lee Hall, the same dorm that both Kelley's girlfriend, Tula, and Shac lived in for their wild freshman years. To mark the occasion, I thought I would write about my own rooming/roommate experiences on the Virginia Tech campus. 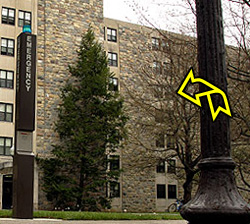 In Fall '96, I was assigned to West Ambler-Johnston Room 5050 which, coincidentally enough, was also the ratio of my high school acquantainces who came to Tech and then failed out because they spent all day locked in their rooms playing Quake. I lived with a sax player from Gloucester who was generally pretty cool when he wasn't on a misguided quest to get me out of my shell by inviting me to sax parties, buying me classy shirts for Christmas, or dragging me to see the newly-revised Star Wars trilogy that had just been re-released in theatres. He also used to play along to Kenny G CDs on his soprano sax, until our perpetually high Resident Advisor, Blair (or maybe it was Shawn), told him to knock it off.

The following year, he moved off campus, and I threw my fate to the roll of the lottery system for a new roommate, ending up in 3119 East AJ with Dan Shiplett (a.k.a. Beavis). Once again, our co-existence was friendly and low-drama. I stayed in writing pep band arrangements, and he went out to give his computer time to render various ridiculous 3D models, like the Marching Virginians Trumpets logo. He drove home to Maryland almost every other weekend, and I generally leeched a ride off of him -- we always stopped in Verona to get dinner at Subway, after which I would eat my sub and then fall asleep for the remainder of the trip. Dan was also a member of the VT Paintball club, and once when he was driving to a game, he slammed on the brakes to stop from hitting a car in front of him, causing a giant canister of CO2 to rocket out of his back seat to smash his car's console.

In Fall '98, Dan moved off-campus and I stayed in the room with a CS major I knew from high school. Relations were good, with the exception of the late nights where he and one of two friends would argue over how to solve mathematical proofs or who was smarter. He was easily the messiest roommate I had, with soda cans and scrap paper littering his half of the room -- a feeble attempt to discover penicillin yet again. However, he was rarely ever in the room, choosing to spend most of his time bugging his high school girlfriend, Kim.

The next year, I moved across the hall into Kelley Corbett's room, which came complete with a Dustbuster, a carpet with padding, a hot pot, and other amenities I had done without in the previous three years (Everything you move in, you have to move out, I reasoned, so why bring anything other than a computer?). When he wasn't on the road spreading the word of the Freemasons, or visiting his eventually-crazy girlfiend, he was off in the practice room or taking a shower with a different towel every day (because the towel touches your junk, and thus, should not be reused). For bonding activities, we would play Blitz '99, watch That 70s Show, or I would listen to his practicing and try to deflate his ego a couple notches. 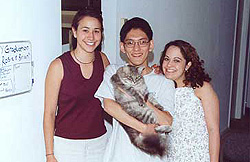 For my fifth year, I finally moved off-campus and into a crappy Foxridge apartment where I got the biggest bedroom and private bathroom solely on the basis of my gender. My roommates were two girls: Rosie, whose was addicted to Dawson's Creek and the first season of Survivor, and whose showers were of epic-length, sometimes longer than an episode of Who Wants to Be a Millionaire with commercial breaks; and Anna, Becca's older sister who was initially worried about what her parents would say when she asked to live with a boy. We also adopted the cat, Kitty, who would ensure that we'd never see a cent of our security deposit by peeing on every square inch of the carpet throughout the apartment.