As housing officials at colleges around the country send out roommate assignments to freshmen this summer, a growing number of schools say they're getting more requests for changes -- from parents who don't like the roommates' Facebook profiles.

It looks like the "helicopter parents" have gained one more weapon in their quest to completely envelope their offspring in a protective Teflon bubble, which means that the day is not far off when the world will be filled with young twenty-somethings incapable of changing a tire or making a reservation. It won't be long until you'll see someone in the check-out line at the grocery store calling up Mom to ask what a "PIN Number" is, or whether it's better to get paper or plastic. 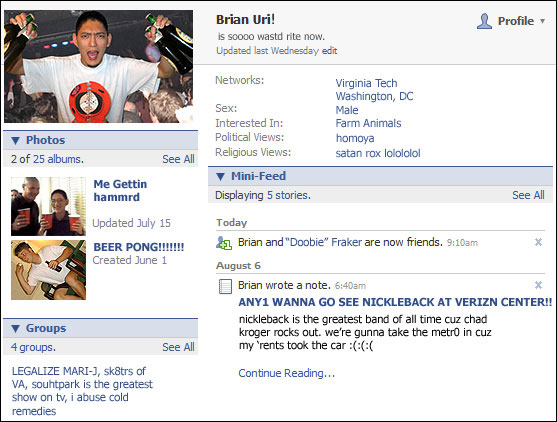 Parents sometimes see cups in photos and make the leap to alcohol and drugs, Manetas says.

Generally, when I see cups, I make the leap to boobies, but the article is somewhat unclear as to what kind of cups are shown in the pictures. This would have been a perfect article for metro.co.uk

, who probably would have posted some booby pictures with the caption "what the cups may have looked like".

The problem with the parents' rationale is that a high-school Facebook profile is 85% posturing and 15% true-to-life. Trying to formulate a picture of what a person is like based on their Facebook page is akin to believing everything you read in an online dating profile (as a matter of fact, I was the runner-up in the 1987 Mr. Universe competition. Just because you're eight years old doesn't mean you can't have the guns).

Wark recalls getting a call from a parent who had "psychological and sanitary concerns" about a student's new roommates, both of whom were gay men.

Those damn dirty gays. Actually, I bet that having a gay roommate would result in more sanitary living conditions than a straight frat boy. Having two gay roommates? You could probably perform open-heart surgery on the living room carpet without fear of infection. 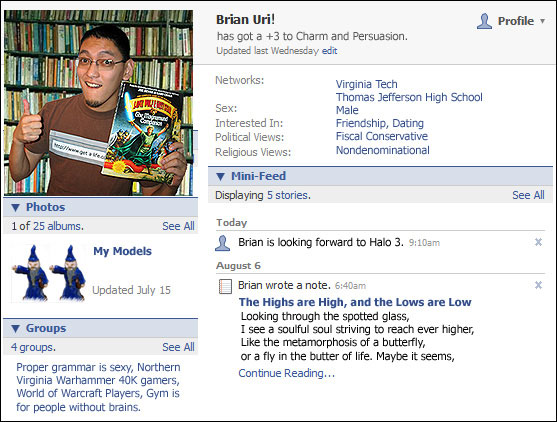 The University of Georgia has a password-protected program called the Dawg House on its website for freshmen to search for roommates.

UG also has less-publicized programs on its website, such as Pimpin' N' Ho'n, for locating roomates of the opposite gender, Fo Drizzle, for catching a ride to campus on rainy days, and Bling Da Bling, for rich Asian-Americans to locate roommates of a similar social and economic background.

Most of the schools contacted by USA TODAY say they have not made roommate changes as a result of such calls from parents.

Thank goodness. I agree that college costs are way out of line these days, but I also think that the parents who are paying the tuition should NOT be treated like university customers. Your kid is eighteen-years-old now -- if he cannot learn to handle roommmate issues on his own, he's not going to get very far in life.1

If anything, parents are looking for the wrong warning signs -- instead of perusing Facebook, they should be checking for the existence of a Myspace account, since it automatically implies that the person will be loud, garish, enjoy bright, pastel colours, spend all their time posting bulletins on the dormitory walls, and own a stereo that automatically turns on when you walk into the room.

1: The only exception to this rule is the one Indian roommate with the overpowering body odour who refuses to shower and can be smelled from all the way down the hall. For some reason, there will always be exactly one of these in every dorm, no matter how many other normal Indians you meet on campus.

Happy Birthday to my sister and Monica Frey!

Memo to the Dept. of Magical Copyright Enforcement