The BU Fiscal Year got off to a late start, which I blame wholly on work -- a convenient scapegoat which I also blame for sore wrists and the resurgence of polio in third world countries. Because of this, I didn't get around to making my plan for the year until just this past week. I always have a plan, for a BU without a plan is like a crossword puzzle without a vowel.

Ever since I got out of the perpetual adolescence of higher education, I've tried to create an overarching storyline to my years in the real world. It's against my nature to have long term goals that I could fill in on one of those "Where do you see yourself in five years?" surveys, but looking ahead a year or so gives me the feeling that I know where I'm going, while still enjoying my blissful ignorance in the present day. Here's what I've come up with so far for 2007: 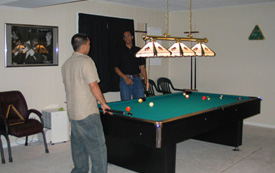 Besides these big projects, I also plan on hosting Poker Night twice a month with rotating rosters of rookies, composing regularly, and using the recumbent bike for 30 minutes a day at least five times a week. So far I'm on target, except for last week's Poker Night which most people had to bail on. I think they got scared when they saw I had gotten second place last Tuesday.

What do YOU plan on doing this year? Share with me as a kindergartner shares a Tonka truck.

Iguana's stubborn erection to get the chop