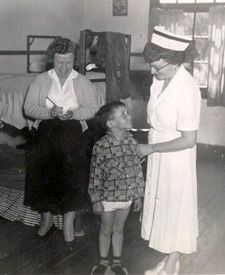 The school nurse at my elementary school was the archetype upon which every future stereotypical school nurse was ever founded. Picture a stark white lady in her early seventies named Beverly (or maybe it was Virginia), wearing white orthopedic shoes and a purple sweater with hair in a ridiculously tight bun the colour of polar bears in a blizzard.

Her job was to treat the neverending parade of kids complaining of stomach aches who occasionally threw up in the halls or the ones who nearly killed themselves on the last remaining Lawsuit Playground in the United States. She also had a cardboard box full of abandoned shorts that you could sift through if it was gym day and you'd forgotten to wear a pair under your pants. As previously mentioned, I never needed this last-ditch stop, having earned the highly coveted "PE Shorts Award" 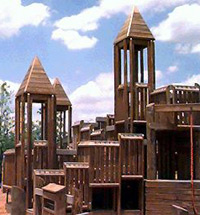 When something ails you in college, you're either pregnant or you have mono. The patient-physician relationship in elementary school follows the same basic philosophy, in that every ailment of the mind and body can be cured with a good old-fashioned ice pack. As luck would have it, you happen to be in the presence of the grand master ice pack maker of all time, a profession I did with pride for three long years, since it got me out of morning day care. (For yuppies in the audience, morning day care is when your parents go to work earlier than school starts and they don't trust you not to burn down the house in their absence. I would have too -- fire is cool).

You start out with a basic paper towel. Not the fashionable kind you see on TV getting soaked in vodka but still able to support the weight of a small child, but the dirty-brown industrial kind that comes in rectangles that you have to fold out yourself to make a square (fashionable paper towels provide square functionality out of the box). Take two ice cubes out of the freezer tray and place them lengthwise on the paper towel, then roll them up like a taquito (if you're Mexican) or a joint (if you're a music major). Fold the ends over to keep the ice from slipping out, then wrap a rubber band around it to keep the ends from coming free. Finally place the whole contraption inside a cheap sandwich bag -- the kind that doesn't zip shut with the flap that you have to fold over. Voilà (or viola, if you're Brianne) you have an ice pack!

Every morning, I would make twenty ice packs and refill the ice cube trays, and by every evening they'd all be gone. Skinned knee? Have an ice pack! ADHD? Ice pack. Frostbite? The school nurse never dealt with any of those cases in our mild clime, but I'm 99% certain I know what her treatment would be.

Thief couldn't flee with all that BOOTY