the 67th edition, a must-have for collectors 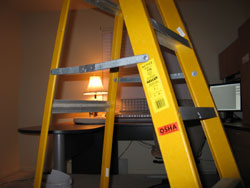 ♣ Last night I started moving furniture and books out of the office in preparation for next month's plan to renovate. I'm going to do the usual fresh carpet and paint plan that turned my three bedrooms into "airy bits of heaven on earth". A season of Extreme Makeover: BU's Home Edition is infinitely better than the ABC variety -- who needs Ty Pennington when you have BU with Hammer?

♣ The Hammer is one of the few Zelda set-pieces not present (yet) in the latest Wii edition, Twilight Princess. I'm about halfway through it now and it's definitely classic Zelda -- 50% frustratingly annoying and 50% inspired. For every puzzly "Aha!" moment or "Hey that's pretty swell" concept, there are an equal number of "Collect nine million gnats" minigames and "don't run so fast or you'll jump off the narrow cliff AGAIN" moments. You'd think they would learn what DOESN'T work after eight million sequels, but there's still an annoying helper fairy that giggles in your Wiimote at the frequency of rising bile. The reason Wiimotes are flying through TV screens isn't Wii Baseball -- it's Midna.

♣ My Wii Component Cable finally came in the mail, meaning I can run at 480p instead of 480i (the Wii doesn't support HD but it does offer progressive scan). The difference when you load games is immediately apparent, and textures are crystal clear and sharp with the new cable. It's like the difference between watching a football game stone sober or under the influence of Forty Friday except that the stone sober version is strangely more fun.

♣ It's almost too clear on some games, since you can suddenly see compression artifacts that are usually hidden by the low output of a normal TV. As a visual aid, here is our own Jason Chrisley to show the difference between an image that's only slightly compressed and an image that's fully compressed. 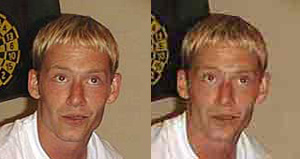 ♣ 'ey man! When you look on the left side, that's me. That's me in HD lookin' hot, 'cause I got the best TV. That's not coo' on the right side, man, 'cause it's blocky as shee-it! I gotta get me some of that progressive scan -- I look good. Don't I look good? I look good.

♣ For the later generation of URI! Zone readers, Jason Chrisley was a Poh-laski native at Virginia Tech who would entice us out to his parents' lake house property with prime cuts of steak from their franchise of butcher shops and gas stations. We would while away the hours jumping on the trampoline, fishing, or paddle-boating on the lake. Despite the fifteen mile commute from Tech, it was the venue of choice for those long weekday nights when no one wanted to go to class the next day. I made out with a girl in the middle of the winter on the dock surrounded by a full moon and two feet of snow. It was key. 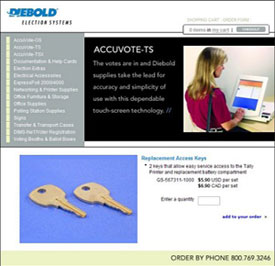 ♣ Speaking of keys, Diebold was, up until yesterday, selling keys to unlock their super-duper protected voting machines -- and if you couldn't get a key, you could always take the screenshot and file a key blank down yourself

. I plan on mass producing the keys for '08 election so I can win the presidency by a landslide.

♣ Happy Birthday to Bob Shrimp and Jaime Williams on Saturday, and Jack Wilmer on Sunday! Have a great weekend!

A married woman who was having an affair with a fellow skydiver plunged to her death after her love rival and best friend tampered with her parachute.

Welcome to the Biden Talk Show