The CMMI Level 14 Process I go through to pick my daily topics is highly robust and flexible, a guaranteed plus in this age of fitness blogs and fly-by-night-nude-celebrity blogs. The process begins four weeks in advance of the publication date, as I sit down at my easel and sketch out a few ideas (not unlike a skilled professional cartoonist). Then I take three weeks and five days off for a sabbatical (again, not unlike a professional cartoonist or music performance professor). 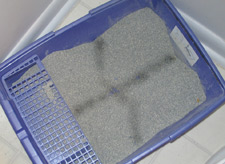 With the deadline looming, I skim the four sources of the apocalypse: the Washington Post, my little pad of ideas I jot down in the car, Uncle John's Bathroom Reader, and CNN.com. I take the best four ideas and erect small popsicle stick signs using my best fourth-grade diorama skills, and then plant the signs in the litter box overnight.

When I wake up the next morning, I assign a point value to each area of the litter box that a cat has pooped or peed on. Generally poop gets more points than pee, unless the clumped pee litter is in a particularly unusual shape, like a flattened C or a tetrahedron. The quarter of the box that gets the most points obviously reveals that Booty and Amber enjoyed the idea planted there the most, so that becomes the idea that you read about the next day. From my mind to the web page, enhanced by bowel movements and Science Diet Light, you get only the finest ideas. 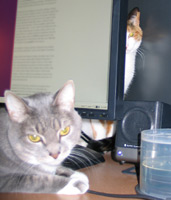 Recently however, the editors have refused to poop in the litter box on three of four nights. Either the selection of ideas is slowly reaching the lowest common denominator like American movies, or I need to add more fiber to the cat food. Regardless, this is where you, the loyal reader comes into the story. On December 1, 2006

, I promised that you'd be able to dictate the course of the URI! Zone and now it's time to step up to the plate. Simply tell me what I should write about in today's comments sections (or send me an e-mail if you are shy, bashful, or generally a dwarf). The best four suggestions will come together in a single week of nonstop guest topics that will get old faster than those Who Wants To Be A Millionaire marathons but not quite as fast as American Idol. The winners of this contest will split 100% of the profits from my Google ads for the month of February.

O'Reilly, Colbert to appear on each other's shows