the culmination of 230 years of American Independence 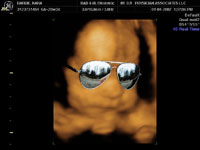 ♣ Yesterday afternoon, Philip sent me a picture of his developing progeny, little Malibu Barbie. With his offspring and Anna's sharing a due date, I'm sure March will be a rather busy month for cigar makers. It won't be long before we find out that the Kelley is the proud daddy of triplets. Wouldn't that be a scary start to the new year?

♣ Looking back, 2006 was overall a good year -- not too dramatic and not too dull, which is perfect for a status-quo maintainer such as myself. If there's one lesson I learned from 2006, it's that you cannot listen to the theme song from Picture Pages without getting it hopelessly stuck in your head. Go ahead, you know you want to

. I bet it's stuck in your head now after just thinking about it.

♣ Before the new year, I did my usually yearly clean up of my MP3 collection, which has now grown to 1185 songs and 82 hours. This is probably much less than many folks out there, but my collection is unique because I actually listen to every single song pretty regularly. I'm one of those people that constantly has some form of music playing -- even at the office there's a barely audible stream of music leaking out of the crappy work-issue speakers, so I get through the entire repertoire in about a week and a half. 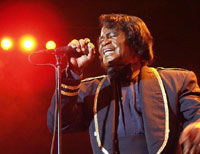 ♣ My collection is ridiculously eclectic. If there were ever a contest that involved finding songs with particular characteristics, like "a song like I Feel Good that begins with a female scream"

or one that ends with a car honk, I would be the supreme winner of the universe.

♣ On my block, there's a particular car full of day laborers that always pulls up to the neighbour's house at six in the morning and honks to get the guy out of the house. Generally the guy moves very deliberately, as if navigating a laser field in a museum safe, so the car will honk three or four times before anyone actually comes out. This is my new pet peeve. Can't you take the four seconds to get out of the car, bang on the door, and get back in? If I weren't already awake and heading for work, I'd probably be more livid about it. As it stands, I'm only slightly annoyed by this habit.

♣ I have never worn a habit, though one summer in college I quit my PEPCO job and got to write "none" on an employment form. That turned out to be quite the enjoyable summer, since it was too late to look for another job with any resolve, so I stayed home, wrote my amazingly literary murder mystery

, played lots of computer games, and limited my purchases to very small or cheap things.

♣ I've made a flurry of small but cumulatively expensive purchases in the past week. True to "razor and razor blades" form, all of my fancy schmancy gadgets and tools from Christmastime require just one more add-on or adapter to have full functionality. I'm now on the list for two additional Wii controllers (sans Nunchucks since they are rare like Ytterbium), a USB Wi-Fi adapter for the Wii's online playing capabilities, an XM tuner to connect to my new receiver (which wasn't enough since XM loves to force purchases upon you), and an antenna for over-the-air HD signals. 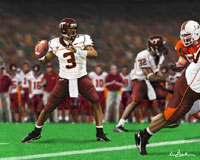 ♣ I'm happy about the last one though, because if it works out I'll get the big networks for free and I'll finally break my inertia and cancel my Comcast cable account (Comcast bought Adelphia by the way). This will save me $600 a year and the only downside is that I won't get ESPN for VT games. $600 vs. football. To some people that might be a difficult decision. NOT SO FOR ME.

♣ This weekend, the plan is to have the BCS games on in the background while I continue to chug along with work. I thought it might be slowing down, but a rabid snare of avian flu contaminated one of my coworkers all week and now I have to step into the breach and plug the dike with my finger. I might also get some Poker in on Saturday night, but only if I win.

♣ Have a great weekend, everyone!

Teen has a veritable party in his underpants