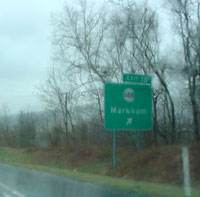 January 18, 1992: I spent the day, and the rest of the weekend at Camp Big Mac in Markham, Virginia with the Boy Scout Troop. Camp Big Mac was a step down from our usual camping spot because it was a desolate snowy mountain in the frigid wastes of Shenandoah Valley, but it was also a step up because it had a dining cabin with a wood stove.

January 18, 1994: I stayed home from school today, and the entire week as well, for what passes as a snowstorm in northern Virginia.

January 18, 1995: Today was a pretty good day. My calves were sore from the lightweight workout yesterday. In civ, I went to the library to work on a seminar which I didn't do very much on. We watched a dull movie during third period. At stage band, I did another good solo. ___ wasn't at school because of she got rear-ended by a school bus yesterday. There was a track meeting at 3 and then a short workout of 3 200's. ____ said that ____ had worn a "booby-hugging" shirt today but I didn't see her.

January 18, 1996: It was quite foggy this morning. In music theory, we had a simple assignment and a free period. In english, we finished the Macbeth recitations. ____'s grandmother died yesterday and she started crying during her recitation. After that we started reading Othello and I got to play all the spare miscellaneous parts. In band, Mr. Dill made the new girl 3rd chair flute and all the other flutes looked pissed. After school there was a lightweight meeting with Mr. Cannon that I went to and then I arranged the National Anthem for pep band. We got 8 more MB of memory in the mail. It'll speed up my games and music stuff alot. 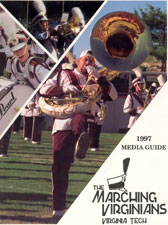 January 18, 1998: This weekend was spent doing mostly homepage stuff. Last night was the Band Banquet but I didn't go. I did get Outstanding Rank Member again though. This morning, I was up early to do my mandatory two hours over at the "Math Emporium", the big computer lab out at the mall. Just a few minutes ago, some guy called, apparently from a radio station on campus and I won $25 for answering a trivia question about VA Tech. I probably cheated because I was looking at the Tech homepage at the time. Oh well; it's free money.

January 18, 1999: The first day of classes went pretty well. The first two are pretty dull but the music course has some interesting people in it. I did go to all of them and practice though; I'm off to a good start! I had my symphony band audition this afternoon which went fairly well.

January 18, 2000: The year is going pretty normally. I've gone to all my classes and been generally productive, although there really isn't much reason to be yet. I sat with Liz in boring MIDI class and later we talked for a while online while searching for poetry for some songs I'm writing for her.

January 18, 2001: I made it into Brass Ensemble, 5th chair but I only play on one song at the moment. Anna and I went over to Kelley and Pip's apartment with Shac where we hung out and played some Blitz. They were all drinking because Kelley had just passed his recital hearing.

January 18, 2002: Another slow day in which I didn't feel like doing much productive work. Pedagogy was a waste of time and I spent the rest of the day in. I also got an offer from FGM to come work for them again this summer. I guess it's a good sign when they call you up five months early.

January 18, 2003: Looking back and looking ahead, I will probably never become actively involved in Scouting again. While the whole process of camping and earning merit badges has a lot to offer to kids, it's counterbalanced by the extreme closemindedness of the organization when it comes to issues like religion and sexual orientation. All of the benefits of Scouting can also be acheived outside of its umbrella with a little extra work. 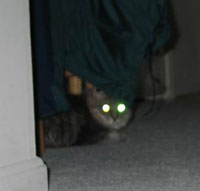 January 18, 2004: Trapped inside by the freezing rain, I have valiantly added new pictures to the URI! Pictures and Cat Pictures pages in the Photos section. Here's a video of Kitty high on catnip.

January 18, 2005: Today was the birth of the URI! Zone Name That Tune contest! I'll have to do that again sometime, if I can think of more accessible genres of music to exploit. Maybe "Grade IV Songs of the District Festivals"?

January 18, 2006: So should my friends ever drag me out to a ski resort, I will probably be the wise, bearded, professor-looking guy camped in front of the fireplace with books and hot chocolate with snow bunnies on each arm, watching cold people fall on their asses through the thick double-paned windows.

Michael Vick keeps his pot in a secret compartment