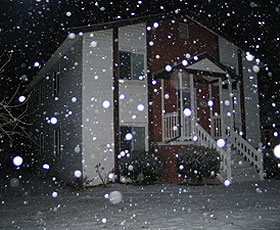 Northern Virginia received its first seasonal allotment of snow yesterday -- just enough to look pretty and completely snarl the morning commute for thousands of real-world application-impaired drivers who skipped the lesson on the coefficient of friction of ice versus water. It'll probably be all gone by midday but depending on the "wintry mix" I may have already decided to sleep in and work from home today, since I am writing this from the past because my time machine was a success.

Despite the extended work schedule I've been on, I've still managed to get six to seven hours of sleep each night, but I tend to wake up in that state where you're immediately aware that you didn't have a restful sleep. This is the state where you can close your eyes on the way to work and feel tiny stings under your eyelids, like someone gently sprinkled a fine layer of fireplace ash in your eyeballs while you slept. It's coupled with dreams that run for so long that they start making sense and having their own internal logic, with later events tying back into earlier ones. I don't think the brain was meant to have contiguous dream sequences like that -- it's like someone made you watch the entire Lord of the Rings overdubbed by an Indian in Spanish in one sitting. 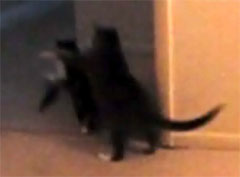 Last weekend, I wanted to sleep in a bit to tune my biological clock, but Booty kept running around meowing for breakfast and trying to find all the irritating sounds that would get me out of bed. Because I was particularly tired, this went on for about twenty minutes before I heard a --click-- and then all was silent. I peeked out from under the covers to see that Amber had shut the door with Booty outside it. I high-fived her and we went to sleep for another hour or so. I always knew Amber was slightly Rainmanesque, but it's nice to know that she has some marketable skills. If she ever has to work for a living because of the recession, at least she can get steady employment in the hotel industry manning the front doors.

Booty gets payback the next day (950KB WMV)

Diary of a goof-off: No work, no pay