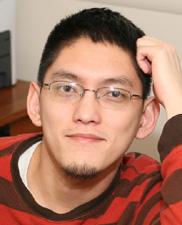 The new year kicked off to an underwhelming start yesterday with a pasty swatch of lingering fog and rain showers. I spent New Year's Eve at home working aided by an on-sale case of Guinness from the yuppy Costco (15 for $17) and a back-on-air UPOP pumping out only the worst in European pop music. The week before I was a veritable hibernating bear (if bears were actually capable of writing code without syntax errors), only leaving my telecommuting den to meet up with the family in Alexandria or restock on the necessities of life (Totino's Clasic Pepperoni Pizzas). This left little time for personal hygiene as can be seen in the rather shaggy portrait on the left. If only I'd had some Doritos, I could have littered crumbs across my chest and been any one of several CS majors from my youth. 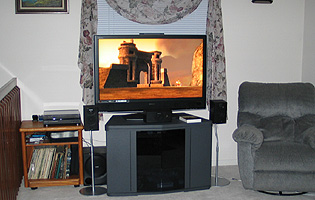 My big present this year was a massive 46" TV with a surround sound system on which I watched the sixth season of the Sopranos during my power-breaks. I was also able to see, up close and personally, Virginia Tech's patented second half playbook where they squandered a 21-3 lead to lose 31-21 -- I'm sure the wide screen was to blame for magnifying all the errors and penalties they encountered on the field (that or the massive OD on Chick-fila commercials).

Despite my previous naysaying, I also managed to snag a Nintendo Wii in a ridiculously overpriced GameStop bundle a week before Christmas. I hadn't planned on it, but the opportunity was there for about twenty minutes before they went out of stock again, meaning I didn't have to wait in lines or travel anywhere at all. The yuppy, it's in my blood. I haven't even had much time to play with it, but it's been worth it so far. 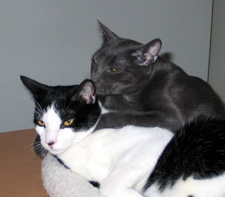 Besides these highlights, my holiday was quite low-key. I took care of the Kathy's gay kitties for a week, learned the Spring Web Flow framework, had a pint or two or three of Guinness, and continued in my valiant efforts to keep the DoD missiles from rebooting over Kansas. This is the last month of crunch time at work, so I'll probably end up taking a holiday week in February. In the meantime, life continues at its frenetically languid pace: eat, work, sleep, repeat, and occasionally rinse.

In order to avoid offending religious fundamentalists, our National Park Service is under orders to suspend its belief in geology

100 interesting facts falsely labelled as being relevant to last year

The piddler on the roof