The elementary school Safety Patrol program is a hands-on extracurricular activity designed to teach our budding citizens-students about the inefficiency of bureaucracy and the futility of law enforcement and positive change. Each member of the Safety Patrol is given an appallingly orange belt, no doubt stamped out of a much larger, yet still appallingly orange skin of vinyl, probably left over from the previous year's reupholstering of the school buses. The clasps are too loose for the skinny kids who break the curve on the body fat test (and too tight for the chubby buggers of Today's America) while the shoulder harness is pocked with pin marks from students incapable of affixing their badge at the proper height. Armed with this belt and a Cliff Notes book of school rules, the patrols are sent out on one of two dangerous assignments.

The drones of the organization end up in school hallways, given the power to yell "WALK!" but unable to reprimand students who don't, like a particularly zany game of Red Light Green Light. These drones often burn out quickly on being a patrol and probably end up highly sought in high school by unscruplous military recruiters in need of cannon fodder. Those that pass this initial round of hallway abuse get promoted to the assignment of standing at intersections to escort kids across the street. This is a choice assignment, not because it requires responsibility and diligence, but because you get out of school early every day so you can get to your street corner before the cattle call. 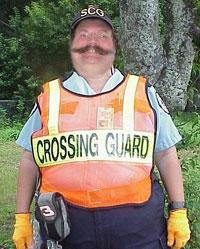 Street corner Safety Patrols actually have the easiest job in the world, because they always play second fiddle to an adult crossing guard in a uniform that actually reflects light. (The reflective properties of the Safety Patrol belt are minimal after years of use, but you can roll it up tightly into a sling and then smack someone across the head with the aforementioned badge). Evidently, most school systems would much rather trust their childrens' lives to the 60-year-old retiree than the sixth-grader who can barely remember to carry the 1. So, the Safety Patrol sits on the corner, his job to keep students from running into the street while the REAL crossing guard stops traffic and escorts the tykes across.

If they really want to break your spirit, they will assign you as a patrol at a completely useless intersection. You can always tell this is the case because the site is not deemed important enough to have a real crossing guard. In my first year as a stalwart Safety Patrol, I got the T intersection next to a forest, which meant there was just a single crosswalk of interest. The crosswalk spanned a dead end street, so no cars ever drove by, but it didn't matter anyhow since no one ever walked this way. The reason? There was another elementary school three blocks over, and this street was the dividing line between school districts. The only people that would ever cross my street went to the other school!

Because this was such a dangerous and crucial outpost of Safety Patroldom, they even assigned two of us to stand there, rain or shine, waiting for kids to cross who never came. Like all good little bureaucrats, we made up a game instead which involved kicking piles of raked leaves against a chain link fence in high winds, to see how much of the fence we could cover before the wind died down again. This game was also the cause of all the demerits I racked up that year, given out by the power-hungry Captain.

Yes, the Safety Patrols have Captains, and Lieutenants and Sergeants, even though the kids holding those offices couldn't even spell those terms. The Captains were always one boy and one girl (take that sexism), generally the students who would end up voted "Most Likely to Intern for a Representative as a Stepping Stone to the White House" in high school. Their job description was to maintain efficiency within the unit, though their actual job involved handing out demerits to underlings who hung their badges wrong or wore their belts with a twist in the fabric instead of neatly starched as God intended.

Kicking leaves against a fence is worth one demerit. Two the second time you do it. The life lesson I walked away with was this: Your boss can't fire you for insubordination if your boss' boss thinks you are a-okay.

Cooper, 21, who was the yellow piece, continually provided wrong answers, resulting in over intoxication.