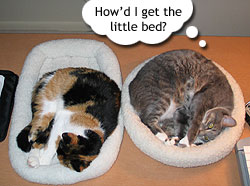 ♣ To get this holiday month off to a holidaic start, I've made my cats wear Santa hats around the house, and pulled the Santa Llama out of moth balls for this site.

♣ I read an article in the Post the other day about the holiday decorations in Target. The always-eccentric fellow they had designing the stores decided that Santa and wood elves were no longer relevant to the Christmas idea. If you go into a Target this week, you'll find sharp angles, reds, greens, and whites, and a general theme that evokes a very modern feeling of the holidays.

♣ You won't find any Wii's though. You will find nine million copies of Zelda, because who's going to buy the game if they have nothing to play it on? 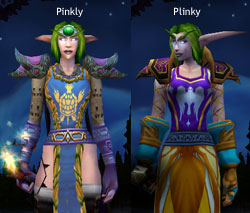 ♣ I haven't had much time for gaming recently but I have had time to get my second priest to level 59. I now have four characters at 59 or 60, all of which are some kind of healer. Sometimes it's a relaxing change of pace to just sit in the back of the team pressing 3 healing buttons over and over.

♣ Kim has a new cell phone number which can be dialed using just 3 numbers on the keypad. This is almost (but not quite) as cool as my own number which entails hitting 4 a bunch of times followed by a couple more random numbers.

♣ "I hope the next time that I move I get a real easy phone number, something that is easy to remember. Something like 222-2222. And then people would say, 'Mitch, how do I get a hold of you?' And I would say 'Just press 2 for awhile. And when I answer you will know you have pressed 2 enough.'" - Mitch Hedberg

♣ "At my hotel room my friend came over and asked to use the phone. I said, 'Certainly'. He said, 'Do I have to dial 9?' I said, 'Yeah, especially if it is in the number. You can try four and five back to back real quick.' " - Mitch Hedberg

♣ All of you readers will have your chance to influence the course of my updates sometime soon, as if you were members of my board of directors (without the 401k). I'm planning on doing a week where you guys pick each day's topic, which could either be highly inventive or highly disasterous. Only time will tell -- time and my infallible ability to rewrite history to my liking with the touch of an FTP button.

♣ Sometimes I miss the innocent days when I hosted the site on my own computer and didn't have to fiddle with FTP every day. The days when I could accidentally type something wrong in the JavaScript and instantly break the site for the millions of visitors I would get every day. Now I have to deal with uploading files all the time, a process made more arduous by the fact that I compulsively close unused windows (or windows I think I'm not using), forcing me to login to my server at least ten times in ten minutes. Then there's the fun times when I hit download instead of upload and overwrite my Pulizter-deserving news post with an old copy. The tribulations of the modern artist.

♣ This weekend will be a simmering blend of work and cleaning, though stronger on the work than the cleaning. I thought about hosting poker, but never quite got around to inviting anyone. Maybe things will be more exciting next weekend when the proceeds from my litigation against Arby's arrive and I can take everyone to a strip club.

♣ Happy Birthday to Cheeselog tomorrow! Have a good weekend!

Father hangs on to roof of car