Today's update is a rather self-serving one -- I realized earlier that Booty will be turning 4 this year and Amber will be 2. Kitty will be 7 or 8, I'm not quite sure which. Over the past seven years of cat ownership I've taken thousands of pictures and posted over eight hundred on this site, so I wanted to highlight a few of my favourites that may have been forgotten over time. Please humour me as I indulge my nostalgia and close out the month of August with a trip down Cat Memory Lane!

Early unnamed kitten in 2000, stalking a hamster but having trouble staying awake. This was during the time that Nacho, Bumpy, and Zoe were all name possibilities, although intertia and apathy allowed Kitty to become the official moniker soon after. 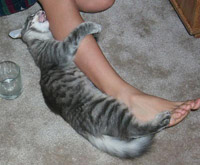 Some people are all about ass and boobs -- Kitty has always been about the legs.

You can safely assume that we threw all our dishes in the dishwasher after this picture. OR DID WE? 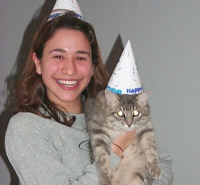 This picture clearly sums up the rough and brutal treatment Kitty had to go through on a daily basis as we put leis on her, stuck balloons to her with static electricity, and dressed her up in angel costumes for Halloween. 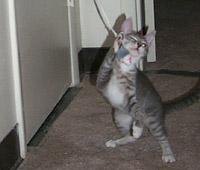 This is Booty in 2003. There is a mouse toy on a string tied to a doorknob, and apparently it just KOed Booty. 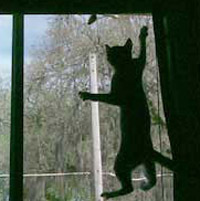 I got tired of playing Fetch with Booty so I hid her mouse at the top of the window screen. This did not deter her in the least bit.

Every Tuesday morning I would come home from Walmart with my weekly allotment of groceries and throw the plastic bags around the apartment for Booty to play with. One time, they surrounded her and fought back.

I warned Booty against joining that gang, the West Side Huevos, but she was in her difficult teen years. 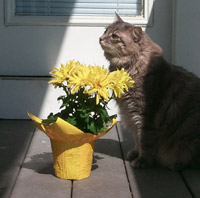 This is such an artistic composition. The only way it would be more artsy is if there were little grotesque baby heads in all the flowers.

A lazy Sunday afternoon in Centreville, 2003. 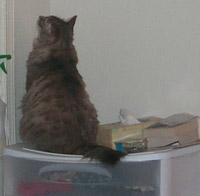 No, that curved dresser top isn't just perspective -- it's critical structural bowing under enormous weight. Your cat's so fat she fell on the wall. 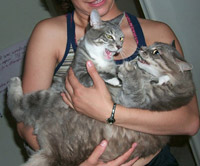 Unfortunately the Olympic sport of Cat Stacking never made it big outside of our home town. 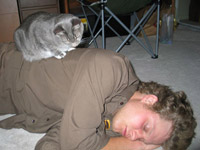 You can just imagine the crazy pranks Booty's cooking up in this picture. She ran out moments later and got some toothpaste and a bowl of warm water.

2005. Amber doesn't realize how dangerous this is, and Sydney just wants to sniff some ass in case there's leftover food in it.

Booty and the new kitten, Sydney. At least one of the three cats in this picture is not pleased...

The Caped Avenger and the Alligator of Doom. This was the day Sydney got spooked while wearing her Food Lion cap and bolted out of the room. Unfortunately, the cape chased her and the sound wigged her out even more. She proceeded to charge through every room of the house in a panic, reaching the speed of sound, before catapulting under the couch and colliding with the wooden frame in a daze.

Flat Daddy -- for when you can't have the real thing