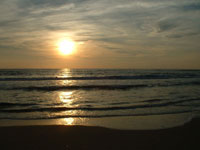 Whenever you go to the Outer Banks, you hear old-timers waxing poetic about the good ole days when beer was a nickle and there were only four people on the beach, all of them related to the Hatfields. Nowadays, a weekend in OBX brings a caravan of SUVs as far as the eye can see, as well as a Home Depot, a Walmart, and even a Harris Teeter, and there's talk of building a new bridge thirty miles north of the sole entry point to allow easier access to several of the towns. I agree that all of this reaches northern Virginian levels of excessiveness, but I don't necessarily harbor any sentimental vehemence against it all. 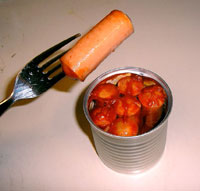 When we'd take our family vacations to Nag's Head in the late 1980s, we would stay in a tiny crappy motel with a kitchenette and eat Vienna sausages and Spaghettios out of the can. It was much like the way I picture life in the slums during the Industrial Revolution, except with more sand and fewer lice. From this unsentimental viewpoint, I don't really mind that there are more stores selling useless crap and a Wings store every half a mile on the main road, because at the end of the day, it's not about the fact that you're on a beach that should make a vacation great -- it's the fact that you are away from your work and your stresses.

Vacations are a chance to turn off the cell phone and recharge yourself, and where one person will backpack the Appalachian Trail to go on vacation, who's to fault the other guy who wants to mosey down the street without shirts and shoes to the Harris Teeter to pick up precooked snacks for dinner? Some people want their little luxuries when they go on vacation, and as long as the Kroger isn't built on the third floor of my beach house with a flashing neon sign, I see no problem with it. I can still get a place in a subdivision of houses with no commercial giants in sight and I can still walk down to the beach without waiting at a stop light. To me, having all the conveniences of urban life just a few miles down the road is a bonus, not an eyesore.

This is also reflected in the place I live -- I'm in a cozy neighbourhood in "rural" Sterling which is only minorly terrorized by MS-13, and I see kids riding by on bicycles most days of the week. However, there's a McDonald's less than half a mile away which I frequent at least twice a month, and all the major chain stores have an outlet within a five mile radius. They're there when I need them, but don't bother me when I'm at home, which is as it should be!

The magnet I designed is the dogs one, but they sure don't tell you that anywhere

Watch out where you build your tree house