♣ To open the day with something of a meta-segue from yesterday's post, I'll be taking care of Kathy and Chris' two kittens starting this afternoon and running through next weekend. I have an open betting pool to see which one Booty will devour in a single bite first: Punchy or Lake. I also have a feeling that the two kittens are probably smarter than Amber and may play tricks on her all day long. 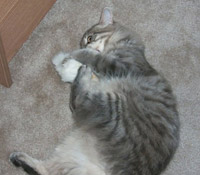 ♣ The playing habits of cats are so peculiar. You can wad up a ball of paper and throw it in the living room, and the cats will not particularly care one way or the other. However, as soon as you've turned your back and are not paying any attention, they'll be beating the crap out of that paper ball like it was being inducted into the Don Gato kitty gang. They must get self-conscious about their games and whether or not they're cool.

♣ Humans aren't much better off. No matter what you do for fun, or what your hobbies are, there's always some superficial sap out there who will immediately dismiss your activities as a waste of time, even if they have no firsthand experience. These people tend to have less fun in life, especially if they are mocking board games. 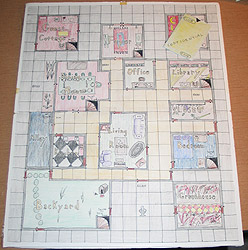 ♣ While cleaning out some shelves in the basement last night, I found two board games that I'd made in elementary school and junior high. The first was based on that book, Island of the Blue Dolphins which I'm sure every aspiring student had to read in fifth grade. You ran around on an island collecting supply cards, killing wild dogs and trying to reach the beach to be rescued. The second game was my own version of CLUE with my friends as the main characters and our enemies as the murder victims -- a charmingly innocent game which would have no doubt gotten me kicked out of school Columbine-style had I been a ninth grader today.

♣ I also found a scale map of Polk Elementary School which we had to make in fifth grade as a math/measurement project. I got an A++ for attention to detail, and a D for neatness. That essentially sums up my life from that point forward.

♣ Speaking of my life, today is the first day of September, which means my birthday is just two weeks away. The day is appropriately coloured yellow on the sidebar calendar, since I too, am yellow. 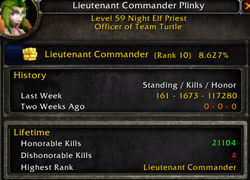 ♣ This weekend I will be playing a lot of Warcraft -- after five months of off and on play, Plinky has reached Rank 10: Lieutenant Commander, and I'm only two to three weeks of "too-much-playtime" from getting Rank 11 which was my goal. I don't see how anyone could ever go any higher though (there are 14 ranks total). I'll just barely squeak out 11 while going to work, having a social life, and entertaining an endless chain of young, impressionable female suitors. You would probably have to sacrifice all three of the above for a month or more to reach that top rank, and I just don't think I could live without going to work.

♣ Speaking of suitors, there was an article in the Post yesterday about how all Japanese women want a sensitive New Age South Korean as their soulmate

. I guess if things don't pan out here, I always have another country to fall back on!

Nowhere in No Shirts, No Shoes do they mention pants

McFlurries no longer a Hedgehog Deathtrap