I'm thinking of a number from one to ten, and I don't know why.

♣ I've been temporarily sidelined by a mild case of pneumociatic triclociglucosis, a completely made up term to describe the bug I caught on Monday which gives me a sore throat, a cough, and stinging allergy eyes. I spent Wednesday at home relaxing and Thursday at home working which, on the bright side, saved me 28 miles worth of gasoline. I probably am not contagious, but I figure it's better to stay home than infect the multitudes of coworkers I would come in contact with. I'm still not fully recovered and it's actually gotten a little worse, so I'll probably only work a half day today. 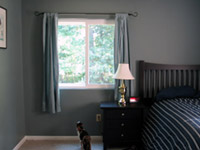 ♣ It wasn't all bad since I got to eat bacon for breakfast and catch up with some timorous online personas who are hard to pin down, like Paige who is visiting in November, and Rachel, who promised to return to the URI! Zone with more dumb-American rants as soon as possible. I also put up my curtains and started watching the first season of Prison Break which is quite good despite the main character only having two facial expressions: wry grin and burning stare of doom. 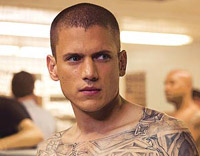 ♣ The show keeps you rivetted although it's so intense that it's hard to watch more than a couple in a row. By intense, I mean that it's unrelentingly grim -- there are very few humourous moments or downtime, and the toe scene and the cat scene were completely unnecessary. It differs from a show like 24, which has a few scenes that are SO ridiculously dramatic that you can't help but laugh at them.

♣ I would probably last one or two days tops in a maximum security prison. The fact that prison conditions are horrible and scary doesn't bother me in the least bit, because it keeps smart people like me from even thinking about breaking the law. If prisons were like summer camps, why would anyone try to avoid them? Prison Break reinforces this because there are only black, white, and Hispanic people in the jail there. All the Asians are too smart for crime (or genius criminal masterminds) and don't go to jail. This is another reason to marry an Asian -- your kids are less likely to end up behind bars, according to this show. Obvious cause and effect.

♣ I read in the Post that the newest Survivor series is going to split the tribes up by race, which just screams "low ratings gimmick" to me. How they expect to do the groupings without offending anyone ("Let's stick the Peruvian with the Herndon Hispanic! They're the same") is up in the air, but the Asians will win because they are shorter and consume fewer natural resources, an important advantage! The first person voted off will be the Japanese guy though.

. I don't see how anyone can look at what he said and how he handled the aftermath and not suspect that he might not be the best guy for the job. It would be a similar situation if I made derogatory remarks about all those dirty Australians on my page and expected Rachel to just "let it slide". I would probably get a verbal lashing in CAPS and lose my membership card to the Friends of the Koala Club.

♣ You may have noticed that I use Clubs now to distinguish each fragment on the page. I'm trying something new and I often win with clubs in poker. I went all-in with Jack and 3 of Clubs last week and won, before coming in last place out of 8 people.

♣ There's no Poker Night this weekend, but that's fine since I have a birthday barbeque to go to as well as a bunch of work to catch up on, pending my recovery from the pneumociatic triclociglucosis. No doubt, I will finish Prison Break too. How did anyone ever watch serial dramas before DVDs?