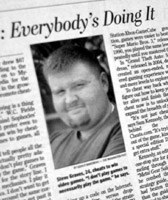 Graves is a self-described "professional cheater." Today's games are anything but easy, the 24-year-old will tell you.

This fellow is a typical instant-gratification child of the multitasking era who dismisses today's games as difficult because he did not grow up trying to type TURN AROUND THEN SHOW MIRROR TO MEDUSA in King's Quest III in the five second window before constant and repeated deaths. Games today are not hard at all -- we just no longer have the time to master them like we did in our youth and tend to give up much more quickly than we would have in junior high school.

"This is what I tell people all the time, and I'm actually pretty adamant about it: I don't play games to necessarily play the game," Graves says.

And sometimes a cigar is just a cigar.

"I play it for the story line"

You are the nameless space marine who has proven too tough for the forces of Hell to contain. After being teleported from Phobos, and subsequently fighting on Deimos which is hanging on top of Hell itself, you're back home on Earth, only to find that it too has fallen victim to the hellish invasion. -- official storyline, Doom II

"I play it for the mechanics."

"I play it for the graphics."

"I don't want to get stuck coming around the same corner 50 times. I'd rather get past it and see what the next story development is."

If the game is really that difficult, the next story development probably isn't even worth the effort it would take you to look up a cheat code. If it's actually quite simple but you're too impatient to work through it on your own, you're destroying the pace of the story by subjugating the artificial barriers the designers put in your way to intentionally slow you down. You can jump to the end of a book too and the story won't be as good.

Graves is a network engineer by day and a hard-core gamer by night, clocking an average of four hours in front of his PC or his Xbox in his Alexandria home.

Graves also stated that he is a hard-core salad bar connoisseur, having once made a second trip to get another salad at the Sizzler during the same meal! The added bacon bits made it Xtra Xtreme.

But what constitutes cheating?

Cheating is any action in a game that allows you to win or bypass otherwise challenging situations using meta-techniques not built into the game. Cheating is not sharing strategies with friends or buying a strategy guide. Using a Warp Zone in Super Mario isn't cheating -- typing IDKFA in Doom definitely is. And sure it might be fun initially, but afterwards, you'll probably find that being extremely overpowered robs the game of the challenge, the fun, and ultimately, any reason to play it.

Is cheating ever okay?

Cheating is fine when you've exhausted the possibilities of a single-player game already and want to find the Easter eggs and extras. It's fun to give yourself a billion dollars in Sim City and then try to build a thriving metropolis solely with railroads and hospitals. It's stupid shell out $45 for a new game and then make yourself invincible to beat it. It's less than socially acceptable to cheat at all in multiplayer games, yet that's where most of the cheating goes on. If you ever have to cheat at a game you play against other human beings, you've got deeper problems to worry about.

"I cheat on all the games I play," Graves says proudly.

In other news, interest in his weekly Texas Hold'em Tournaments has curiously dried up, and he is no longer allowed to be the banker when his friends play Monopoly.

Smuggled school weapon turns out to be an unusually long burrito