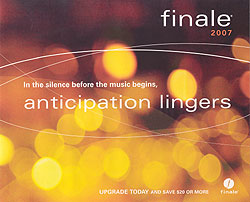 I received this pamphlet in the mail yesterday, advertising the next version of Finale, my music-writing software. The cover looks like a badly-designed reading primer from the 80s and comes with a nonsensical-if-you-stop-and-think-about-it slogan, "In the silence before the music begins, anticipation lingers." What does that even mean, and how does it relate to notation software? I don't have any solid proof, but I think they just copied the poster from next year's horror movie, Dark Alley. 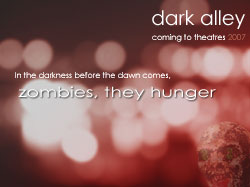 Flipping through the pamphlet, I didn't really see any features to get excited about. Just a few additional formatting techniques that will make every part you print an unintentionally unique snowflake and a bunch of musical sounds that still don't sound like the real deal. Honestly, I haven't used any new features in the Finale programs since the 2002 version, but somehow I'm supposed to believe that it's a bargain to upgrade to 2007 for a mere $99. I probably won't think it's a bargain until they invent a cap I can wear that converts the music I'm thinking in my brain into picture-perfect scores and MIDI files. Brahms ain't got nothin' on the symphonies I store in my brain, but sadly no one will ever get to experience my unadulterated musical genius because I don't feel like transcribing the score onto paper (this is the world's loss).

Here are some other signs that I don't always need the latest and greatest to survive:

AIM 5.1.3: The last version before they added all the useless ads, sounds, and streaming video, cluttering up my buddy list. I also pair it with DeadAIM 3.2.1 for tabbed browsing and hiding of all the useless AOL gimmicks.
SUPER Notetab v2.63e: This fine text editor is circa 1996 and is what I use for ALL of my web site and much of my daily work as well.
WordPerfect 12: Another 1996 fossil -- I would use WordPerfect 5 if they made a version that still worked in Windows. I could go off on a tangent here about how much I dislike Microsoft Word and how it tries to anticipate your every action and usually gets your intentions wrong, but that's enough for a whole update on its own.