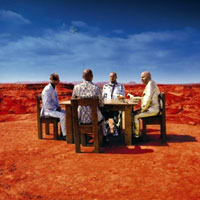 A few weeks back, Muse released their fifth album, Black Holes and Revelations

, which quickly became their second album to reach number one on the U.K. charts. I first discovered Muse in August 2004 when Butterflies and Hurricanes played on my XM Radio somewhere on the road between Philip Barbie's wedding and the Outer Banks, and I was immediately struck by how musical their music is, despite their hard rock stylings and occasional foray into the use of noise as a musical instrument. The first CD, Showbiz was a rough, noisy first stab with a few catchy tracks. The second, Origin of Symmetry sacrificed the idea of catchy singles for a cohesive concept album with a lot of electronic experimentation, and the third, Hullabaloo, was a forgettable live CD that only showed that bands who use lots of effects shouldn't be heard live.

Their fourth CD, Absolution, was the first CD I listened to, and is also one of my all-time favourites

. Their music was characterized by pretentious melancholy lyrics, driving beats, distortion walking the fine line of chaos, and a serious, ridiculous air in each song that says, "This is obviously the most important song you will ever hear in your lifetime", a feeling that's quite familiar if you've ever listened to Kansas. I enjoy that their sound is chaotic, but perfectly ordered and clean, not just a random collection of cymbal crashes and grunts. In their fifth offering, the three person band has greatly matured their sound, trying out a variety of different styles (quite successfully) while maintaining their signature sound. If Origin was their artistic album and Absolution was their catchy album, Black Holes is the mulatto (tar) baby that also introduces a lusher electronic pad and vocal harmonies for the first time.

Reviews for CDs online are generally useless, because people who don't have the CD in front of them don't really know what's being discussed. The people that DO have the CD are probably fans, so the review will be immediately dismissed whether it's good, bad, or self-serving. For this review, I've included extended clips (of crappy quality) from each song so you can hear what I'm hearing -- something of a Virtual BU Experience on the Internet. Even if you hate Muse's style, you may find a couple of songs you like in this latest offering. So plug your earphones into your computer at work, give a listen below!

Track one sounds like it could have come straight off the Origin album, and works well even though it's nothing new. The lyrics are a poorly disguised diatribe against our current President, since that's what all the "cool" rock groups are doing these days. Luckily no one really listens to the lyrics of songs anyhow, and it doesn't drag down the worth of the song at all.

The first song ends with a crashing chaos of electronic sounds which makes the pure, simple sounds of "Starlight" twice as effective, because you don't expect it in the least bit. This almost-pop song is the nearest to a commercial single that I've ever heard Muse create and it's also my favourite song on the album. I've been listening to it ad nauseum for days now.

Generally when you talk about the beat in Muse songs, you're talking about a driving, frenetic percussion that clueless teenagers can headbang to. This third song mixes it up by actually introducing a real beat, one of the "shake your big booty" variety from any song written overproduced for VH1 in the past three years. I half expected some bad trendy pop idol to sing the lyrics after the introduction to this song. After the initial shock, I liked it, right down to the grungy falsetto.

As if they were trying hard not to sing the same thing twice, the band's fourth song mixes a techno-dance beat with a thick electronic pad to create a song that'd be at home at any rave (or in any amateur video posted on YouTube). I say this with authority from my ample rave background, which ended after a tragic glow-stick mishap in elementary school. Harmless, but easy to listen to.

This is one of two slow songs on the album, and although it's solid, it's not very memorable. Muse's slower songs work best when they evoke the angst-ridden, haunting quality of "Sing for Absolution" and "Endlessly" from Absolution. 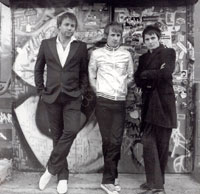 "Invincible" is one of those neat songs that builds up from nothing but it's definitely not the best song on the album. In fact, I think it only exists to showcase the electric guitar solo which sounds hard. My working knowledge of electric guitar is sorely lacking, ever since I was cut from the Heavy Metal Ensemble at Virginia Tech, so someone else will have to tell me if it is, in fact, difficult to play.

To make the Absolution fans happy, this is the song that most resembles that album. I like it, but it's not as innovative as the others.

This song tries to channel the vibe of 80s hair bands and grandiose rock operas and mostly succeeds.

There's no bluegrass on this CD, but this is Muse's attempt at Spanish Rock. Spanish Rock is easy to write and easier to listen to, and no doubt this will be the first song transcribed for marching band when Muse goes mainstream. Look for it at JMU in 2009.

This is the required "haunting Muse ballad", and is also the only time that Chris Bellamy shows off the heavy-handed piano riffs that made Absolution so unique. It's a good song, but not one of my favourites -- the tempo changes and style make the song feel like one big fermata, and I hate big fermatas. Your mother was a big fermata.

This song could have been pulled straight out of the 80s, and sounds like something that might have resulted from a Queen - Kansas jam session. It's a great way to close the album, and also reveals that Bellamy's falsetto is as unnervingly high as it was seven years ago.

Bottom Line: A perfect CD for Muse fans, and not a bad way to introduce yourself to Muse if anything piques your curiousity. The entire CD is forty-five minutes long -- long enough to get your money's worth without Muse overstaying their welcome. Couple that with the cheapness of the CD ($9 at Amazon) and you have a winner. Tell me what your opinions are in the comments section! (If you don't listen to the clips and subsequently reply, I will have wasted an hour of my life recording samples and I will cry like a little girl)

Please do not get too close to the meese