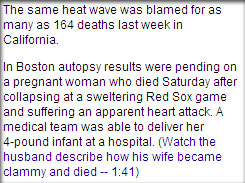 ♣ There are some stories on CNN.com that just don't require a multimedia experience, and the one on the left is a prime example. Another example of text you'd never want to see on CNN.com: "Watch as Auntie Maybell shows off the three foot tapeworm in a jar that she had surgically removed from her intestines".

♣ There was an article in the New York Times about tapeworms the other day that was illustrated with a raw fish wrapped up like a birthday present with a ribbon of tapeworm. I bet there is an entire untapped market of "stuff you can make out of a tapeworm" from ribbons to Slinky's, and it's only a matter of time before some entrepreneur steals this idea and runs with it. 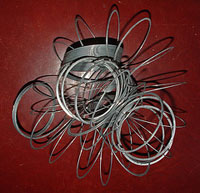 ♣ I think the humble Slinky could be one of the worst toys ever invented, surpassing even the ball attached to a paddle and the yo-yo. What are you supposed to do with it after you drop it down the stairs and watch it hit the bottom? You can either wear it on your arms or get it caught in some girl's hair. Barrels of fun for hours on end.

♣ When I was a kid, my toy types were always segregated. Though you might see little girls letting Barbie ride their My Little Pony, you'd never find army men playing in Lego houses or Construx cranes built next to Lego spaceships. I never even allowed different Lego sets to mingle with other Lego sets (and I only built things using the instruction booklets). Apparently I followed instructions quite well. I also did this with the Etch a' Sketch Animator, which I mentioned some months ago. Creativity is overrated.

♣ Recently I've gotten the urge to start composing again, but I still haven't been able to sit down and put anything to paper. I think my three year hiatus and the obvious masterpieces of popular music I've listened to since I left school would make for interesting compositions. Maybe I should take a retreat some weekend and shut off the Internet and TV, then see what sort of musical gems I can fashion. 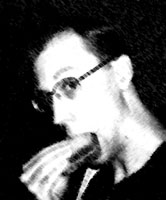 ♣ Honestly, everybody has a pretty mundane day, but everyone else's days always look several times more interesting than your own when you look at the pictures. For my Saturday, I will be doing a healthy mix of house work and yard work, with further doses of hanging out and staying in. I've also decided to get back into career-enhancement mode a bit, and bought two new books from Amazon. Which should I read first? The one on Ruby or the one on AJAX?