Brick is a very strange movie.

It's one of those indie films that saw critical success, but didn't really make much of a splash when it was in theatres. The core of the story is a new spin on Film Noir, with a hard-boiled detective, a salty dame, and all the usually twists, turns, and deceits. What's different here is that the genre is applied to a high-school setting, with young actors filling the roles of each of the stereotypes. All the characters talk in a very strange patois of detective slang and high school slang, and the actors are quite skilled at talking without moving their lips. By mid-movie, we had caved and turned subtitles on (which actually aided our movie comprehension in a big way). 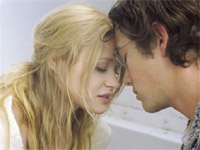 The actor from the TV show, 3rd Rock from the Sun, plays Brendan, a loner high school kid whose ex-girlfriend is mixed up in some shady dealings with drugs. When she ends up dead in a sewer drainage canal, he sets out to figure out what happened and maybe get a little vengeance along the way. Among other familiar faces is the actress who plays Claire on LOST (hard to see in-character because she spoke without the Australian accent) and Richard Roundtree, also known as SHAFT. There's a fair amount of violence and lots of talk about drugs, but this has to be the tamest portrayal of the drug world in the history of drugs, since no one is ever seen actually using any of the drugs. The cinematography is a little dull, with many shots of thinking faces and the sky. The director apparently liked shots where clouds filled two-thirds of the screen and the land with tiny people walking filled the bottom third. 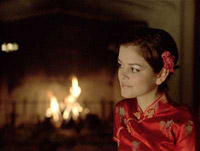 The mystery unravelled in the movie IS decent enough to sustain your interest, but I think it would have been much more effective had they just played it straight -- either a Film Noir in an adult world, or a normal whodunit with high school kids. Putting the two together was just too jarring to be effective. I never quite "accepted" the internal logic of the movie's world, and it took me nearly half the movie before I could figure out exactly what people were saying, but it was intriguing nonetheless.

Digging up a spammer's gold doubloons

Feeling blue, say "I do"