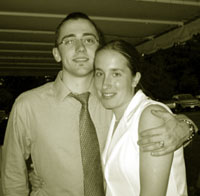 ♣ Ex-roomate Kelley Corbett and ex-girlfriend of ex-roommate of other ex-roommate Kathy Hanna are getting married today in Kawai, Hawaii! (Kathy is the girl). No doubt they will have a kid named either Kasey or Klyde, and move into the country where they can live in rural Fincastle with "The KKK Family" painted idyllicly over the doorway. Congratulations!

♣ Since the cute couple eloped, in a manner of speaking, I now have a free weekend in the middle of September which I would have otherwise spent in Staunton, Virginia, speed-trap capitol of I-81. Maybe I'll have a 27th-birthday-oriented barbeque and invite friends from all walks of life. Alternately, I could move to Idaho and become a hermit, connected to the outside world solely through the Internet.

♣ I still have a wedding to go to at the end of September -- Kathy and Chris' Magical Wedding Extravaganza, to be held in a toll booth on the south side of Jersey (Interchange 1). Rumour has it that many faces from the Tallahassee scene will be making an appearance. 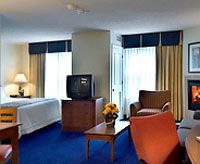 ♣ The wedding isn't really in a toll booth -- it'll be held outside in the grassy area of one of those left-turn roundabouts.

♣ To attend this wedding, I had to book a room at a place other than a Super 8 or a Motel 6. I'll be staying at the Residence Inn, Mount Olive

, a posh extended-stay inn that's right next to the reception location featuring multiple beds, high-speed Internet, a kitchen, and two to five concubines. I'm sure there was a Red Roof Inn within driving distance, but it probably would have been booked up for the weekend's Poetry Festival, and besides, staying within walking distance of receptions is generally seen as a wise move.

♣ Why do you need to monopolize hotel rooms for a Poetry Festival? Don't people that go to those just tire themselves out snapping fingers in the coffeehouse then get high and pass out in a big love circle to the sounds of folk music? Having never attended one myself, I can only hypothesize. It must be pure ecstasy when some up and coming poet rhymes "clown" with "disown". 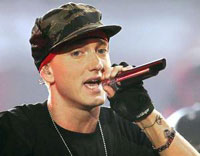 ♣ I think that if you're going to create a poem where the ends of lines rhyme, they ALL should rhyme. Using words that are spelled the same but sound different is a big cop-out. Even Eminem is clever enough to think up a rhyming word for every occasion, although in at least one song, he did rhyme "shit" with "shit".

♣ I haven't heard anything about Eminem in months now. Is he still writing? Marrying ex-wives? I lost interest when all of his songs started being about his daughter. It's just not a very compelling topic for a rap song.

♣ Once again I have no big plans this weekend. On Sunday, the carpet goes into my master bedroom, finally completing the PUFFIN BAY GREY masterpiece that's been sitting empty for a month now. I've been living in the blue guest room all month, which is quite cozy, but it'll be nice to have the big bed again. Even though I don't move an inch when I sleep, at least I have the option to do so.

Digging holes can be hazardous