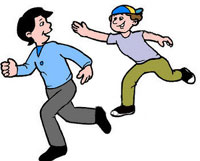 I was tagged by Anna

on Friday. It's becoming increasingly hard to come up with things that aren't already on my 222 Things About Me page


Now, in an effort to promote cross-blog pollination, the six people I'm tagging are Kim

, Kathy, and Rachel. The last two don't have blogs, so they can answer in the comments section. If I'd picked more people from my list of bloggers, then the other four might get P.O.'d for stealing the people that they could tag.

Daddy, the only thing I found out today is I don't want to be Jewish