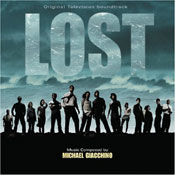 LOST: TV Soundtrack by Michael Giacchino
Written by the guy who wrote the soundtrack to The Incredibles and Alias, there's nothing amazing or underwhelming about this CD -- it's just a solid television score in an age where it's just as easy to overdub a scene with a throwaway Blink 182 song. Giacchino must have done something right, because I could picture the images from Season One of the show in my head as the various songs and motives popped up. The ensemble is interesting too -- a studio orchestra, ten trombones, four harps, three guitars, and three percussionists, who spend most of the CD performing on custom instruments created from the wreckage of the crashed airplane from the pilot episode. Not a single trumpet in sight. Rating: A

The Golden Compass by Philip Pullman
This is the first book in the multiple-award-winning His Dark Materials trilogy. Part fantasy, part Crichton-technothriller, and part childrens' fable, the trilogy is a vague retelling of Milton's Paradise Lost. Pullman is quite the skilled writer and there's obvious care and attention to detail in every aspect of the world he created for this series. I actually read this book twice before continuing to the next one, because I wanted to make sure I didn't miss a single detail. Imaginative and worth a read. Rating: ****

The Subtle Knife by Philip Pullman
Book Two immediately draws you in, turning the tale of Book I on its head with a simple understated foreward that's only two lines long. Pullman does a great job of deepening the story without letting it get out of control, and the story confirms the fact that this trilogy has an overall arc to it (unlike the show, 24, which uses its middle section to give everyone amnesia and STDs from mountain lions). This book wasn't as finely crafted as the first, but it was much more of a page-turner. Rating: ***

The Amber Spyglass by Philip Pullman
Let's say you were the next Jane Goodall, on the trail of the elusive Gherkin Monkey in the rain forest. You come across a steaming pile of monkey dookie on the forest floor and use your otherwise useless biology major to deduce that this poop does, in fact, come from the Gherkin Monkey. You trek into the wilderness for several months, often coming across more exciting signs of the monkey, from a tuft of hair caught on the bark of a tree to some of the monkey's underpants. After long hours spent getting closer to the monkey, you suddenly arrive at the end of your journey to find out that it wasn't a Gherkin Monkey after all, it was just an everyday opossum that was tragically misunderstood. That's the type of letdown I got from reading this conclusion to the trilogy -- I had high hopes for a rare artful work and ended up blinded by monkey spoor. It becomes clear from the start that Pullman has an anti-religion agenda, and throughout this long, tiresome book he lets his preaching get in the way of his storytelling. The book meanders through universes and vague philosophies, using coincidence to bring unrelated characters back together when they need to be, and losing the thrust of his original story under the weight of his anti-church sentiments, which aren't even coherent enough to write a thesis on. There are many imaginative stories told here, and the conclusion of Lyra and Will's story is emotional and touching, but it's hard to notice these tiny good things when you're wading through monkey dung. If you're like me though, you HAVE to read this book if you've read the first two books just to find out what happened. Rating: * 1/2

Derailed
This thriller starring Clive Owen and Jennifer Aniston was "okay". I have yet to like a movie with Clive Owen in it -- maybe I should start paying attention to that. As thrillers go, it's pretty easy to figure out the twist, and too much time is spent developing characters and back stories that could just as easily have been skimmed over. It also suffers from a dose of Melissa George, she who can't decide if she's blonde or brunette -- in this movie she can't decide if she's English or American. The film is about twenty minutes too long, and even has an ending after the ending which needlessly stretches the running time out by another fifteen minutes. Rating: Yawn

Bowling
Last weekend, I went bowling with Kim after dinner at the Capital City Brewing Company in Shirlington. It had been over four years since my last bowling outing (which was in Blacksburg when Kelley and Philip still lived together

) and I'd forgotten how fun it was. I bowled a 149 in the first game, which was slightly above average for me, but then promptly dropped by thirty points in the second game after my luck had worn off. Now if only they could invent a fan that magically removes all the smoke from your clothing as you leave the alley it would be a perfect outing. All us'n Virginians should definitely do more bowling together. Rating: Set phasers to FUN!

I'd rather have an antique watch

Chad Darnell on the end of Alias

Police release sketch of rape suspect, then advertise for a new artist