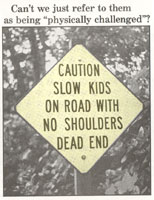 My cul de sac used to be a juvenile wasteland, where all the neighbours were old, Hispanic, or old Hispanics. Sometime between last summer when Anna and Kathy moved out, and the beginning of Spring, children began emerging from some hidden child dispenser, biking up and down the court or playing firmly in the way of oncoming traffic like ineluctable locust swarms. There are now at least ten children from age three to thirteen who congregate daily under the shadow of the portable basketball hoop and the deft tones of poor dribbling echo through the pavement into the foundation of my house for three hours every evening.

Playing the role of the neighbourhood hermit (which involves unhygienically crouching over a typewriter in the back room with the lights out, poring over tomorrow's web update), I never noticed that all of these families had moved in. I suppose this means that I'll soon have to write checks to buy cookies from the Girl Scouts and cheese and sausage from the local marching bands.

Yesterday, I happened to be outside mowing the cancerous growth of my lawn (the result of four inches of rain in the past week) when the kids got tired of running around in circles while the big kids played basketball. They all formed up in a friendly driveway, organized by one of the older boys, and took turns in a battle of wits. And by battle of wits, I mean they had a "your momma" joke contest. Granted, all the jokes were pretty stale, and some of them just got weirder as the kids got younger (one four year old said, "Your momma's so fat, she falls on the wall.") but it's a good sign for the future when kids can form themselves into teams to sling insults at each other. Everywhere you go these days, you hear people complain about the youth of today

, how they're rude, ignorant, or feel like they deserve everything without work. But if the kids on my court are any indication, their parents are at least doing something right.

Years from now, when little baby Thor Uri! goes running up the court into oncoming traffic, he's going to be the pro momma jokester that organizes the other children into pun wars. I will be proud.

You've got to have goals in life

Who needs karate when you're a magician?