The Car As a Microcosm of Its Owner's Cleanliness: A Highly Scientific Study 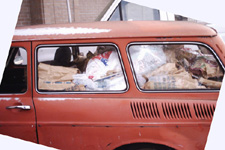 You may think your friends are neat individuals, vacuuming the house before they have company, or shaving their lambchops off before the big dance. They might fool the public by having a nice clean desk with all the clutter tucked safely away in a drawer. However, all bets are off when you take a peek in their car. One glance through the back window is usually enough to confirm or dispel the myths about their cleanliness.

Walk down the row of any parking lot and you'll see a variety of cars with their interiors in various states of clutter, from impeccably spotless cars that show the owner is out at the gas station every Friday afternoon at the 25 cent vacuum, to cars so filled with receipts and bags and fast food wrappers that CSI: Miami could reconstruct that person's life from the last four months with amazing accuracy. In some cases, Lab Technician Tshombe from CSI: Zaire could do it with nothing more than a pair of forceps and a rock.

My own car interior is a little dusty, but has no clutter. This is by default though, rather than any concerted effort on my part -- I spend so little time in there that the only thing in the backseat are a pair of gloves and a scarf for cold mornings and a Club, which I like to slip on the wheel in seedy neighbourhoods (even though I never lock it -- it's just for show, because if someone's really going to steal your car with a Club on the wheel, they probably already have the tools needed to get it off). As I pass by other peoples' cars (on my daily constitutionals through parking lots where I search for illegal immigrants and provoke crime to fight), I've seen varying levels of craziness, such as:

I bet it's even worse in SUVs, but the world will never hear about them, because I am too short to peek in the windows.

The original meaning of scumbag is "condom".

Round One: Rosie O'Donnell vs. Naomi Campbell