I'm a regular reader of Chad Darnell's blog, and decided to join this month's round of 12 of 12 for hijinks and fame (and the women of questionable morals that often follow fame). In a nutshell, it's simply a blog update where you take 12 pictures of your daily routine on the 12th of the month -- you can see his archive of past months here

. This is what I did yesterday: 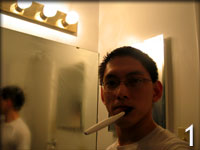 1) 5:39 AM: Waking Up
My alarm goes off every morning at 5:25 AM, and if I don't drag myself into the shower immediately, I will never get out of bed. This picture is actually a redo -- the first one I took was of me shaving, but the lens was so fogged up that I just looked like a blurry yeti with rabies (the last thing anyone wants is to find their picture on Google Images under just such a heading). Why are toothbrush handles so big today? Are peoples' hands getting smaller? 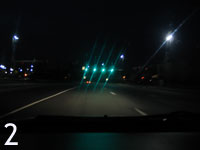 2) 5:57 AM: On the Road
I love my commute because it's only seven miles long. I love it more because the lights are always green at this ungodly hour. The artistic flare of the traffic signals can either be attributed to my impeccable picture-taking technique or the way I balanced the camera on the steering wheel while driving over potholes -- your choice. 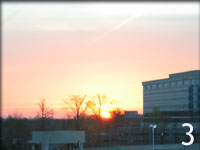 6:40 AM: Sunrise in Reston
After I've had my hot chocolate and a breakfast bar, caught up on the news and all my e-mail, and attained some level of mild consciousness, I can turn around in my swivel chair to watch the sun come up over the Reston skyline. 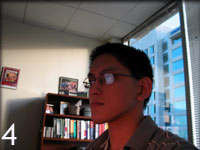 8:47 AM: Working Hard
Two hours later, I surface from the tribulations of work to snap a quick one-handed picture of myself at my computer. That it's surprisingly in focus is a sign of my award-winning "left-handed technique". Get your mind out of the gutter. 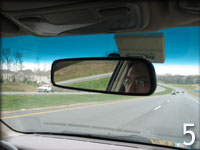 1:04 PM: Driving Home
I head home right about the time that all those clowns who wasted an hour for lunch at Chipotle are coming back for more fun-filled work. Notice that my eyes are, in fact, on the road, although moments later, I hit a cow. 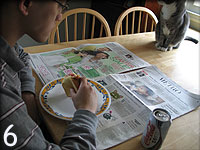 1:27 PM: Eating Lunch
This is me, eating a ham sandwich and reading the Washington Post. Apparently the President is unpopular, there's war in the Middle East, and that vegetable you thought was healthy actually causes eyeball cancer. 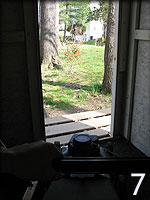 7) 2:14 PM: Mowing the Lawn: This is me, wheeling my lawn mower out of the shed for the first mowing of the year. Immediately following this action shot, the front wheels of the mower got caught on the lip of the shed door and I almost dropped the camera. Undeterred, I gassed it up and trimmed my vast expanse of lawn (all 0.12 acres of it). 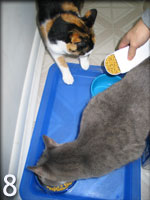 8) 4:01 PM: Feeding the Cats
I have two automatic food alarms installed in my house, and they start going off as soon as I get home from work everyday. Generally I can hit the Snooze button on these alarms until around four o' clock in the afternoon, which resets the alarms so that I don't have to hear them again until I wake up the next morning. Any earlier and I get an earful right around 3 in the morning, which is not fun for anyone involved. It's like my own personal version of the timer in the hatch on LOST, and things get pretty ugly if I don't get the food bin out in time. 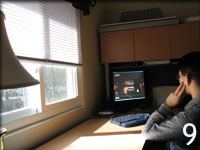 9) 5:45 PM: Playing Games
After a quick shower, I decided to sit down for a game of World of Warcraft. Playing this game is like playing the lottery: you type in your username and password to login and then wait while the game tries to load your account. Five minutes later, you get a message saying that there's a problem with the server, you can't connect at this time, and to please try again later. This was fun for about eight and a half minutes. 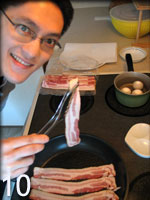 10) 6:23 PM: Cooking Dinner
There's no healthier way to end the day than with a dinner of toast, orange juice, five slices of thick-sliced bacon, and three soft-boiled eggs. Am I right? Bacon grease is clinically proven to lubricate your internal organs like WD-40 on a squeaky hinge so make sure you get at least two helpings of it every day. P.S. The bacon was disappointing, and ended up looking and tasting like damp paper towels. 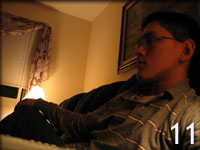 11) 9:04 PM: Watching LOST
It's Wednesday, so I'm watching LOST. Rather, I'm watching commercials intercut with tiny LOST interludes. I took this picture during a commercial so I wouldn't miss the moment when Michael Vaughn crawled out of the hatch to tell Locke he was one of the 4400. I hope that wasn't a spoiler. 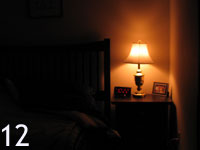 12) 10:22 PM: Going to Bed
Yes, I go to bed incredibly early because 26 is the new Geriatric. Moments after turning off the camera and getting in bed, I got back up because I realized that I'd better upload the final picture so it wouldn't just be 11 of 12 (and 1 more still in my camera). A more apt title for this picture might then be Feinting to Bed. 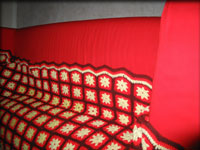 Bonus Picture: "RED"
A stunning aerial flyby shot of a vintage 2002 IKEA couch, made more comfortable by a red afghan.

Were you awed by the level of thrills and excitement in my day? I was going to include the part where I deciphered the alien language and successfully communicated to the alien ambassador that we have nukes, but cameras aren't allowed in that facility. These are all the parts I can talk about.

DEA Agent Who Shot Self In Foot Sues U.S.