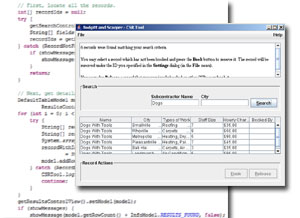 Following a home stretch of working all weekend long and taking a half-day at work on Monday, I have my Sun Java Developer's Certification project finished and ready for submission. The skills required to write the program are nothing that any decent developer wouldn't know already or be able to pick up quickly -- the hardest part of writing for me was going back through it at the end to make sure that every single line obeys the Java Code Standards on formatting, which dictate such minutiae as how many spaces are in 1 hit of the tab key (4) and how to place the curly braces between if statements. Besides that, doing all the work was reasonably interesting in a sick-work kind of way, although it did make me feel like I was back in college again.

I have to make sure that I submit it quickly enough to get it over with before I start second-guessing all the design decisions I made when writing it (but not so quickly that I make a careless mistake). What makes this particular certification so daunting is that it's expensive and anonymously graded. Here's how things work:

So the problem here is the opacity of the grading process. As soon as I submit the project, it's out of my hands and I have to hope the anonymous grader doesn't have a bad hair day. This certification is all about being able to make solid design decisions so there's no one right answer. If the grader dislikes some of my designs and subtracts some points, it wouldn't be the end of the world. But if I lose a point here for having more than 1 whitespace, and another point there for using a capital letter, eventually they can add up. I could fail and have no guidance on where things went wrong to make the second submission any better.

All this heartburn for a worthless piece of paper and a line on my resumé that I'll never reference again. Someday, I will become a high paid consultant and create my own brand of certification on something, then make all my money by failing people and forcing them to resubmit for half the price. This could be the biggest money-making scam ever created, although I'm obviously not the first person to want to exploit it (see also, CMMI, and graduate school).

Spider has fiery revenge on nudist

Robotic moose has revenge on hunter