How I Spent My Spring Break by Brian Uri!

I came home from work on Thursday morning and left the carefully manicured suburbia of Sterling in my sensible Honda Accord for the idyllic splendour of Blacksburg. My street is like Wisteria Lane, except that everyone else speaks Spanish and there are no attractive neighbours. 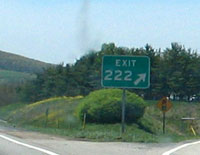 This is Exit 222 in Staunton on I-81, the second most boring interstate on the East Coast, trailing only I-95 in sourthern North Carolina. The only reason Staunton exists at all is so you know you're halfway to Blacksburg (and so Kelley can have his wedding in September). The smoke signals rising in the middle of the picture are not Virginian Indians -- it was just a giant flying beetle that splattered across my windshield. On your right is the scenic view that you get when you drive down this interstate.

My sister lives behind a trailer park in Christiansburg near the drive-in movie theatre. They just evicted someone with a meth lab in one of the trailers. Welcome to southwest Virginia.

This is far too many animals for a house that you could fit in the back of a Chevy Suburban. You can see close ups of these animals and new pictures of Booty and Amber here 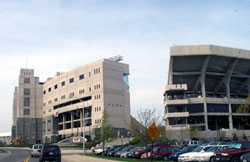 I think the completed stadium looks like an ugly leftover prop from Battlefield: Earth. The campus is much more gentrified than I remember -- there are traffic lights at all the intersections where you used to be able to laugh at all the sorority girls in their PT Cruisers getting in fender benders. The pool hall in Squires has been remodeled to look like a sports bar, with carpet and hanging TVs and bar lighting, and the food court now has an Au Bon Pain that you can actually walk into. There should never be a reason in this life to walk around an Au Bon Pain.

Fifty-five former students of Dr. Bachelder made the trip back to town for his retirement concert, some from as early as 1972. We all had a surprisingly coherent sound given that many people had not played in decades. When the actual concert came around, Dr. Bachelder played a few songs with the symphonic band and then the current students moved around the sides of Haymarket Theatre for an antiphonal piece in his honour. Halfway through that piece, the doors opened up and all the alumni filed in to finish the piece. If you are unfamiliar with Haymarket, picture an auditorium designed for one-act plays and chamber groups. Then put an eighty piece band up on the stage and ring sixty to seventy trumpet players around the outside edge. Finally, put a crowd of unsuspecting parents in the center, hemmed in on all sides with no escape and tell the trumpet players to play as loud as possible (honestly though, when does a trumpet player ever need to be told that?). Parents who had just come to town to hear their kid play the oboe were suddenly bombarded by a wall of trumpet sounds that did not relent for another thirty minutes. By then, everyone in the middle was deaf, and the U.S. Department of Defense had entered talks to use trumpets in their latest "Non-Lethal Aural Weapons" program. 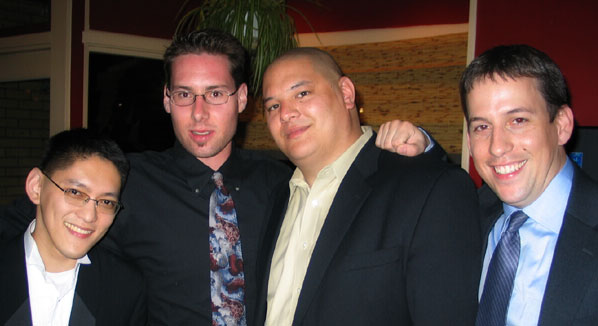 The post-concert reception was at Gillies, across the street from Squires. I marveled, for a moment, at the fact that I'd never been in Gillies before, but then realized that it was a vegetarian cuisine, and I would have had absolutely no reason to step inside in the five years I went to school there. The food was rather sparse, since the music department budget is now comparable to the salary of a single professional musician who can't get a symphony gig and ends up teaching private guitar lessons at Music and Arts.

This is Doobie, on the right. He wanted to be in my update today, even though he's a tuba player. 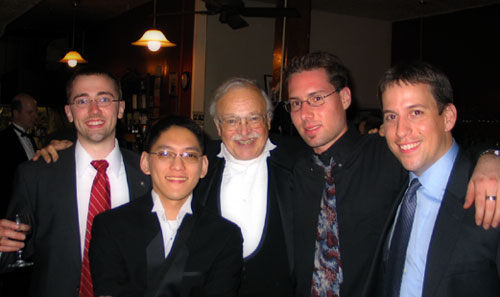 I left Gillies around 1 AM because I am old and had been up since 5 the previous morning. The next day, the few remaining trumpet players who were still in town staggered into the music department around noon to take Dr. Bachelder out to eat at Mike's, where they made fun of Scott for still being drunk thirty-six hours later, Chris for being a big Chinese guy, and Kelley for being a poor trumpeter about to marry a high-powered lawyer. So in essence, nothing at all had changed.

Bonus Picture: I am incubating a dinosaur in my hair gel.

For more pictures from this weekend, visit the Photos section