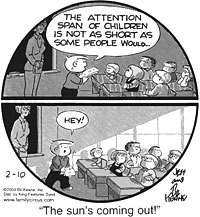 I remember a time when the Family Circus used to be "aw shucks" cute, even if it was never hilarious. Nowadays, it's either hip Internet throwaway jokes or it has a personality crisis and wants to be a boxed strip rather than a single frame. Yesterday's comic is a prime example -- having a caption and also a balloon text just doesn't work if they're sequential. It just says that the cartoonist ran out of space and had no better place to jam the text in. A comic that tries this and succeeds is Close to Home, since either the balloon or the caption can be read out of order and the humour is preserved.

I think it's about time for Family Circus and Dennis the Menace to finish off and get replaced by Classic versions of the same, like Peanuts. There should be a Classic Calvin and Hobbes too, while we're at it, and the Boondocks should not take up a whole third of a page just for a two shade gradient background and a throwaway joke about famous black people.

And stop with the Garfield. How many ways can you kill a spider?

Today is closing day. Tomorrow's update might be prepared in advance, like a famous dead guy's obit, with any house news held off until Saturday.

Bush plans to back marriage amendment

Swimmer drives with shark on his leg

Bussey didn't have a telephone, so he made 45-year-old Roy Andrew Gendron mow the lawn with a push mower until he could think of a plan to alert authorities.