There have been plenty of upgrades going on in the past couple of weeks as the stuff in my house (including myself) continues to atrophy over time. For example, the Blue Couch of Amazing Naps is now 12 years old, and the Coffee Table of Grad School Adventures is 15. 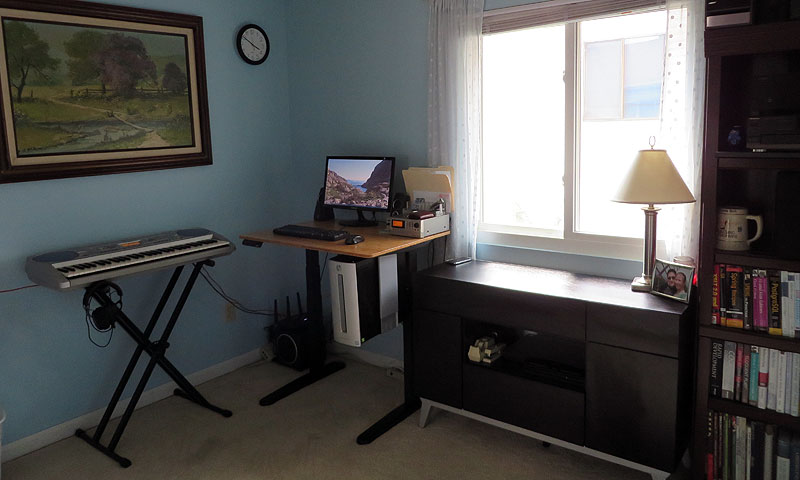 The American Dream desk (whose name was coined by Jim Barry because it had all of the space a composer could ever possibly need), constructed on March 19, 2004 and decommissioned on September 1, 2016, grew increasing wobbly as I moved it back and forth between two separate rooms that alternated between being a bedroom and an office. It has been replaced with an Ergo Depot Jarvis standing desk ($650), which has an electric motor that raises and lowers the desk like a hipster transformer, so I can now play Overwatch for hours in a standing position and call it a healthy activity.

To make up for the many cubic feet of storage space the old desk had, I bought the credenza seen underneath the window in the above photo ($250), where I keep office supplies and bags full of extra cables (wrapped neatly in 1996 era bags from the Hokie Bookstore). This credenza also holds the flatbed scanner I use to bring history to life, although the color photo printer has been relegated to the basement crawlspace because I never used it frequently enough to keep the printer heads from clogging.

I also bought an adjustable music keyboard stand ($37) so I can compose while standing or sitting. It had the right price point, but smelled horrible because of cheaply made rubber caps from China. Leaving them outside in the sun for a couple of days got rid of the worst of it, but it initially smelled like I did during crew season when I weighed 100 pounds and tried to fill the coach's launch with gasoline from a 50 pound container and spilled it all over my legs every day.

I replaced my desktop machine with an HP Envy 750se (i7, 16GB RAM, 256GB SSD) ($1000) because my 2011 machine was starting to get unpredictable IRQ blue screen crashes. I still hate Windows 10, but have to admit that it runs much better as a fresh install than as an upgrade from an earlier OS. I kept my Xonar DX sound card and GTX 960 graphics card from the old box.

I also upgraded to Finale 25 ($150) with the whimsical thought that I might do more composing in the future. I last upgraded to Finale 2011 which had enough issues to make composing a "not fun" activity. I haven't used the new version much yet, but am pleased that many of the obvious MIDI problems have gone away in this new 64-bit version. I still need to see if the historical "stuck MIDI note" issue will rear its head once I start using it more intensely.

The fresh install of Windows 10 eliminated the free Windows Movie Maker software I used to use to convert old home videos for your viewing pleasure, so I've finally installed Adobe Premiere Pro (already owned but never used) and started watching tutorial videos which demystify the horribly overarchitected UI that always scared me off in the past. I am now able to crop a movie clip, fade in and out, and add a soundtrack, which is really all anyone ever needs to do.

Finally, I just purchased a Dell XPS 13 Ultrabook ($760) to replace my 2012 HP Folio. I loved the Folio, but it was starting to have graphics issues and random keys would sometimes stop working. If I could just get another Folio for a reasonable price I would have, but the Dell sounds like a decent replacement. It's a classic ultrabook with extended battery power and no touchscreen (does anyone want a touchscreen on their laptop?) In the spirit of hand-me-downs, the Folio will become our foreign travel laptop (devoid of personal or work details to prevent Chinese espionage when we cross the border), and our 2009 Netbook will go into the basement crawlspace where electronics go to die.

These major infrastructure investments will rejuvenate my primary work area in the house, and I'm hoping they lead to new patterns of productivity or creativity in the last months of 2016 which, otherwise, has been pretty placid. The $2847 net price tag is about $2500 more than I would spend in a normal frugal month, so I will have to forgo lunch at Popeyes 496 times to balance out my checkbook.

What are you spending your money on this month?