♠ The bottle caps in my Magic Hat beer sampler from Costco have slogans written inside them. The slogans run the gamut from weird ("Upon the Fruits of Our Yeast, You now Feast"), to racy. I'm guessing you're supposed to be drinking Magic Hat at a fr(h)at party and then giving the bottle caps to cute girls like heart-shaped candies. Wouldn't you want to go home with someone who could do magic and promised to give you his "wand"?

♠ Speaking of racy drinking, parents are up in arms over a ridiculously campy Orangina ad featuring anthropomorphized animals doing sexy dancing while splashing Orangina all over themselves. This is the perfect way to start your Friday.

♠ Watching videos on YouTube can be dangerously addicting, because the "Related Videos" that appear at the end generally have nothing to do with the original. From the above Orangina ad, I followed a link to a movie of Nicholas Cage punching a woman while wearing a bear suit, followed by clips from that movie, Wicker Man, a horror film remake which looks unintentionally amusing. This is the best kind of amusing.

♠ Also amusing is the Bluetooth-wearing CIA agent in the SUV who was stopped at the intersection by my office the other day, waiting for the light to turn green so he could enter the CIA complex. They probably teach a good number of skills at The Farm, but apparently they don't teach you about pressure-plate-triggered traffic signals. This fellow was one of those annoying drivers who waits for a left turn almost in the middle of the street, not realizing that he had gone at least five feet beyond the pressure plate. As a result, he was still waiting there two signals later, looking frustrated and gesturing at the light. 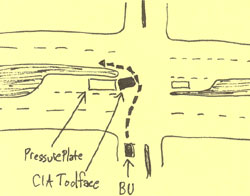 ♠ I did my part by passive-aggressively driving around him on a Family Circus path that showed he was obviously too far into the road. This is the recommended approach for all rude-lefters -- if you get hit, it's their fault and you can sue for whiplash. 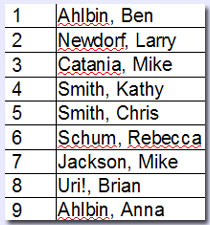 ♠ This being a holiday weekend, it is jam-packed with plans (the jam protects my plans from getting damaged in transit and is also tasty). Tonight, we plan to go to Jazz in the Garden, although the inclement weather may force us to another venue boasting such features as a roof. Poker is planned for Saturday, where I'll teach everyone how I get so high in the rankings, and I'll teach my computer that my girlfriend's name is not a blatant misspelling. On Sunday I plan on finishing up BUVite and then searching for my chap stick -- I've lost three chap sticks this week alone, and I'm not sure how.

Help wanted: My kids are a pain

Woman goes down the baggage chute at airport